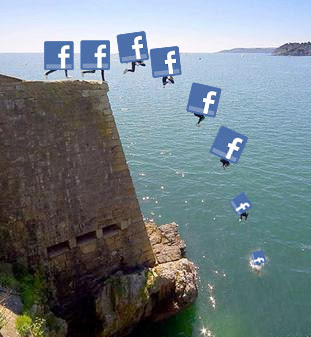 In case you have not been following the news, Facebook went public last Friday on an IPO (Initial Public Offering) selling public stock for the first time in a huge amount of world wide publicity.  Investors rushed to buy stock at the offer price of $38.00 per share, hoping to repeat what happened to investors who made fortunes on dot.com IPO's during the tech bubble of a decade ago.  Buying initial shares of Yahoo! for example way back then, and holding on to them, increased in value by a factor of over 20 times within a few years.

Instead, billions have been lost. As of the end of trading on Tuesday, Facebook stock was down to $31.00 per share and falling.  People are worried sick about this triggering a new recession if the stock continues to fall.  My own estimate is that the stock will probably stabilize at about $33.00 a share by Friday.

The only ones who have made a great deal of money are the executives and original investors in Facebook, including the incomparably charming Mr. Zuckerberg,  and the Wall Street investment concerns who handled the offering. Everyone who wolfed up the stock at $38.00 a share has lost billions collectively. And not only that, apparently monkey business has been played in artificially elevating the price of the stock during the offering by investment bankers Morgan Stanley to spark interest in a federal fraud investigation - as if this is not the first time Wall Street Insiders have made fortunes on the back of everyday investors.

Is anyone surprised by this?  Facebook is not Google. It cannot make money selling search terms. In addition, advertising there does not work. General Motors has pulled its ad schedule. How can Facebook actually earn any money without completely turning its users off by forcing advertising at them, and revealing their purchase intentions to potential advertisers that they share with their closed group?  Facebook is worth quite a bit of money, but cannot be as big as Google in the long term, even with 900 million worldwide users.

I just use Facebook for posting tweats. I visit there every quarter to see what my 516 friends, about 20% whom I have heard of, are up to and take more friends requests. I just don't have much time, and are too busy with my Second and Real Life to play Farmville, as alluring as the name is.  In addition, I find the relentless search by Facebook to pull all sorts of tidbits about me and reveal them to others creepy.

I need to hand it to the Facebook folks. No one has cashed in on hype in the past decade since the housing bubble ended in 2006 in Western economies. But I am curious -- did anyone else see what could trigger another hi tech recession coming in terms of the Facebook fall?  It seems to obvious to me to have happened to begin with.