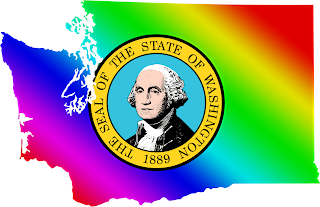 The State of Washington is now the 7th State, and the first on the Pacific Coast,  where LGBT people have marriage equality.  Washington has a population of nearly 7 million people and includes the City of Seattle.


Washington State Governor Christine Gregoire has just signed the bill into effect in a very emotional ceremony. However, the measure, which won final legislative approval last Wednesday in a 55-43 vote in the state House of Representatives, will not take effect before early June.

A ballot initiative is expected to gain enough signatures to overturn this law. However, Washington has backed gay rights in past voting referendums. The support by Washington tech companies, including Microsoft and Amazon, is seen as important in passing and defending this initiative.

Same-sex marriage in now legal in:

in addition, the Federal Capital, The District of Columbia (Washington D.C.) has approved same-sex marriage.