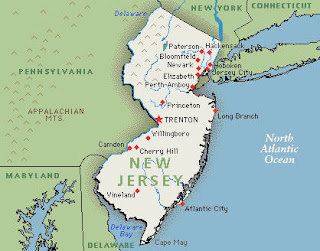 The State Senate of New Jersey has just passed a bill legalizing same-sex marriage by 24 - 16.

A vote in the New Jersey State Assembly is set for Thursday.  Passage is certain by the Assembly; but the margin of passage is not yet known.

What is significant about this bill is that Republican Governor Chris Christie, a social conservative, Republican Vice Presidential hopeful,  and panderer to the right wing of the Republican Party, has promised to veto this bill. However, 2/3 majorities in both the Senate and Assembly will override any veto.  The vote today in the State Senate comes close to the 27 votes needed for passage.

New Jersey has a population of 8.8 million and is the

The State of Washington is will shortly approve same-sex marriage.