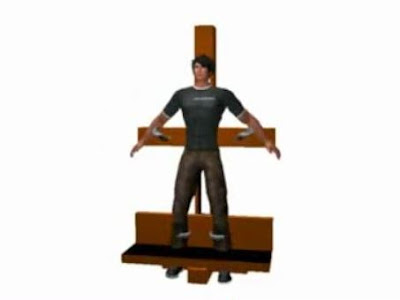 My partner, Jago Constantine, has a You Tube Megahit with over 100.000 views.  There are at least 23,000 videos about Second Life that have been uploaded in the past five years; only about 100 in total have achieved 100,000 views.

Jago uploaded this video called "The Crotch Teaser Stand" in March, 2009 staring himself. Here is what he wrote back then:

"Created by Second Life resident Cinde Fate in January 2004, the 'Crotch Teaser Stand' makes use of the inbuilt 'Editing Appearance' pose for bondage play. The stand is a sturdy wood-textured design and comes with a single pose which can be rotated through a text command to face front or back. This stand is widely available as a freebie."


My only comment to Jago about this machinima was that he should have taken his shirt off to show off his hunky torso at a minimum, or perhaps wear one of the Get Butch swimsuits he modeled two year ago at a charity event.


Please enjoy this video and make sure to congratulate Jago on his first megahit in comments below.  You can check his other videos, including one that features me as a bound slave on a display platform here:

Email ThisBlogThis!Share to TwitterShare to FacebookShare to Pinterest
Labels: Jago Constanine, You Tube