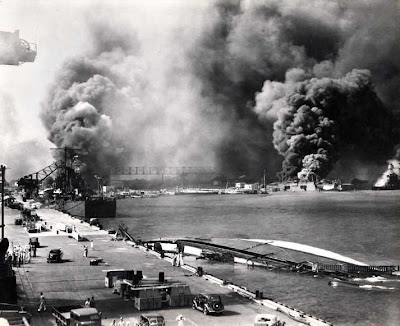 This day is known as "Pearl Harbor Day".  Any American born before 1930 has vivid memories of this day, much like a later generation has of the World Trade Center attacks in 2001. Radio, not television, conveyed news of the attack back in 1941. Japan and the United States were negotiating a peaceful settlement to the Pacific conflict earlier in the week. The United States was embargoing fuel and materials due to Japan's invasion of China in the 1930's. The attack surprised the Japanese negotiators in the United States. 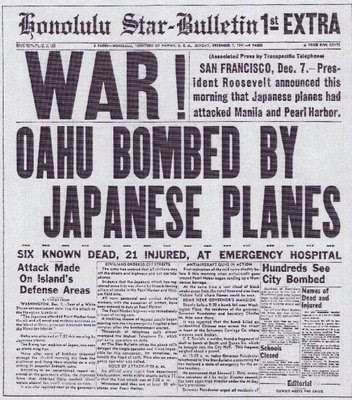 The attack had limited military value, 6 of the 8 old battleships were ultimately repaired, and none of the aircraft carriers of the United States were damaged.  The United States would hand Japan its greatest military defeat in the Second World War 6 months later at the Battle of Midway by sinking 4 of the 6 Japanese aircraft carriers used in the Pearl Harbor attack at a  cost of one of one of its own, the Yorktown.

President Franklin Roosevelt declared December 7 "a date which will live in infamy" in an address to Congress. President Roosevelt was a great orator; if you have not heard his speech I play it here below. He promised victory to the United States and gained the confidence of the American people with this speech.  President Roosevelt could not walk during his 11 years as President and was confined to a wheel chair due to the Polio virus.   Although the media of course knew that he was an invalid, they never showed him in a wheel chair or mentioned it in press reports. It is doubtful the media today would show a President such great respect.


Some conspiracy theorists feel that President Roosevelt knew about the attack and did not respond in order to get the United States into the Second World War to help the United Kingdom and Russia defeat Germany. I do not believe it and feel this is insane conspiracy talk. It is a controversial point among some however.

Here is a video of President Roosevelt's great speech before Congress on December 8. Congress was firmly against the United States entering World War 2 against Germany before the attack:

"Yesterday, December 7th, 1941 — a date which will live in infamy — the United States of America was suddenly and deliberately attacked by naval and air forces of the Empire of Japan"