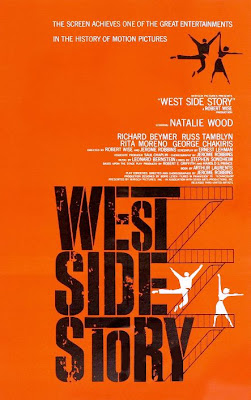 West Side Story, considered by many to be the greatest film musical of all time, was released 50 years ago today.  The film is an adaptation of the 1957 Broadway musical of the same name, which in turn was adapted from William Shakespeare's play Romeo and Juliet. It stars Natalie Wood, Richard Beymer, Russ Tamblyn, Rita Moreno, George Chakiris and Tucker Smith.

The film won ten Academy Awards in its eleven nominated categories, including Best Picture, as well as a special award for choreographer Jerome Robbins. West Side Story holds the distinction of having won more Academy Awards than any other musical film. The soundtrack album sold more copies than any soundtrack album before it, and more than the original cast album did.

The great American composer and conductor Leonard Bernstein wrote the magnificent music that can be heard throughout the film.

The film used many singer stand-ins for the actor performers.  Here, Jimmy Bryant sang for Richard Beymer who played Tony, and Marnie Nixon stands in for the beautiful Natalie Wood (1938 - 1991) who played Maria, in the films most famous song, Tonight.

I am having problems finding clips that can be embedded from the movie so I will provide a link here:  You will need to get through a commerical to see and hear the clip:

One stand-out who sang his own songs was the handsome Tucker Smith (1936 - 1988), who played the role of Ice, a member of the Jets gang, in the film  Tucker Smith's career never really progressed after his impressive opening since he was openly gay throughout his career, something not well tolerated at the time.  However, his raw talent, voice, looks, and charisma show what a superstar he would have been if he were born 40 years later.

Feel free to search for other scenes in the movie over at You Tube, or better yet, rent or purchase the movie and see an incomparable film for yourself tonight.
Posted by Eddi Haskell at 2:07 AM