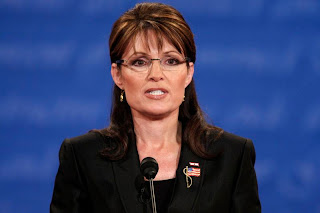 This is a not a political blog. I write about politics at times, especially gay rights issues.  But I have spent three years blasing this woman above, Sarah Palin, who I consider  to be a right-wing demagogue. My Second Life german shepherd, Albert, even had a blog and still has a You Tube video up about her. (Note:  It is very funny and sarcastic).

Now, I was amazed to see this morning that the most influential newspaper in the United States, the venerable New York Times which is considered to be a bastion of progressive and liberal thinking actually had something great to say about her positions on the issues lately.

In fact, I think she has summed up what is wrong with the United States government -- and the rest of the Western World -- in a brilliant and succinct way.  In fact, it sounds downright socialist.

Here are some things she has been saying.  And she is right:


“Do you want to know why nothing ever really gets done?” she said, referring to politicians. “It’s because there’s nothing in it for them. They’ve got a lot of mouths to feed — a lot of corporate lobbyists and a lot of special interests that are counting on them to keep the good times and the money rolling along.”


She even goes on to define good and bad capitalism.


You can read the entire New York Times article here.

Interestingly, when she first ran for Vice President, Sarah Palin was moderate on gay rights issues - especially for a Republican. She moved to the right on social issues when pressured by her own party. She used her first veto as governor to block a bill that would have prohibited the state from granting health benefits to same-sex partners of public employees.

Will Sarah Palin run as a third-party candidate whose goal is to completely shake up the current system of government in the United States which is destroying the great American dream for millions of working and underemployed people?  Who knows. Stranger things have happened.  If she can get away from her tea party right-wing baggage she actually could do good.

New York Times Link:  http://www.nytimes.com/2011/09/10/us/10iht-currents10.html?_r=3&adxnnl=1&adxnnlx=1315569719-RpR5AuX40tZqZl8xOiUg7g
------------------------------
Addendum: Apparently third party talk is already in the works.  Read the Christian Science Monitor article on Wednesday. If she does run as a third party candidate, it will practically guarantee President Obama's reelection next year by splitting the Republican vote.
http://www.csmonitor.com/USA/Latest-News-Wires/2011/0907/Will-Sarah-Palin-run-for-president-as-Tea-Party-candidate