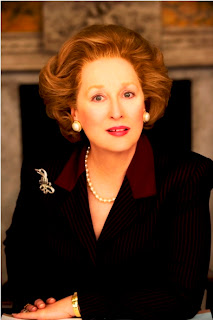 Although the movie will not be released until January 2012, talk of the industry is that Meryl Streep will be putting in a performance of a lifetime in the role of former British Prime Minister Margaret Thatcher, in a movie to be called the Iron Lady. She will probably win her third Best Actress Oscar confirming her role as the greatest actress of her baby boomer generation.

85-year old Margaret Thatcher is in bad health right now; and a huge state funeral in the U.K. for her is planned when she dies, the first Prime Minister to be awarded one since the great Winston Churchill's 1965 funeral. If this were to happen before the movie is released expect an even more interest in it.

Just to set things straight, I am not a fan of Mrs. Thatchers. Although she did a great deal of good for the British economy, her anti-LGBT legislation and racism in supporting the Apartheid government of South Africa almost destroyed the British Commonwealth as an organziation -- something that fortunately did not happen. But she certainly is a figure of great historic interest.