The Hottest Second Life Resident for the months of June, July, and August according to you, the readers of this blog is Tadd Rives, Owner of Tadd's Cabaret.


This image of gorgeous Tadd, published here on March 18 has been downloaded by blog readers  more than any other photograph of a Second Life resident I have published this year. In fact, it has been downloaded over 1100 times since being published.  I am measuring reader interest in an image to determine "hotness", the more downloads and page hits, the hotter the photograph

Note that many readers of my blog -- about 50% - do not come from Second Life but come to these pages for my real world coverage, and many come to check out the hot real life and Second Life men. My photograph that ran of Tom Cruises hot torso in Top Gun which was 25 years old actually was one of them that exceeded Tadd in interest. Go figure!

In addition, the following photograph of Tadd has been downloaded quite frequently since running here in October of 2010.  It is still being downloaded.


How do I know?  Here is a list of posts with photographs provided by Google to me for the past week. Every week has mentioned Tadd since June. Although several real life guys actually beat Tadd, he is the only Second Life Resident to make the download list, also confirmed by Statcounter Software which measures actually downloads.  Only Abercrombie hunk Drew Van Acker and fitness model and actor Scott Herman have been on every posting summary since June along with Tadd. 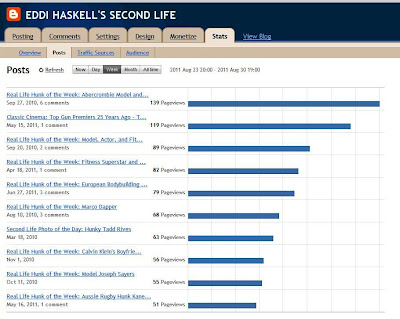