You Tube: Amazing Movie Shows Life in San Francisco Four Days Before the Great Earthquake and Fire of 1906. 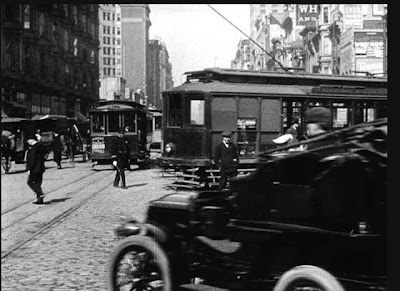 This is an incredible video making it's way around You Tube and the general media. It is a very well filmed film called "A Trip Down Market Street", the main thoroughfare of San Francisco, which was thought to have been made in 1905 or earlier. San Francisco was the largest city in the Western United States then with a population of 400,000, and a thriving cultural and trade center.

This film is historically significant on its own as a realistic vignette of life 105 years ago, when the automobile made its first impact on American cities. However, some very good research proves that the film was made only a few days before the great San Francisco earthquake and fire on April 18, 1906. 3,000 people died then, and the majority of buildings no longer exist, as the downtown burned to the ground.  By the time it was rebuilt in the following decade, a different and more modern San Francisco would emerge, losing its place to Los Angeles as the most important city in California (well, in size and industry at least).

The last video shows you what Market Street looked like after the earthquake, before it was rebuilt yielding many of the building that populate it today.


To see the 60 minutes report on the video: http://youtu.be/tYHGj19RrF0

The same scene one week later: