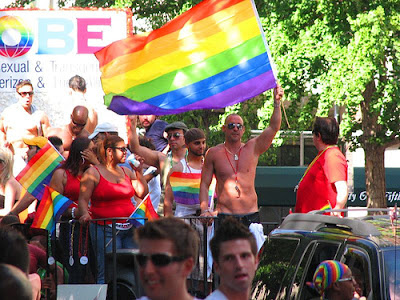 I am picking up the entire Reuters report that just came out. At some point, the 32 Republican New York State Senators will want to go home and will have to make a decision on whether or not to allow a vote. The good news is that the longer this is delayed, the more likely a compromise is to be worked out on ensuring that people opposed to gay marriage on the basis of religion rights are protected. --


Reuters- The New York state Senate again put off a vote on legalizing same-sex marriage on Thursday, and the Republican Senate leader said lawmakers would meet again on Friday to decide what to do.


The bill is one vote short of enough support for passage in the state Senate. It was approved in the state Assembly by a comfortable margin.


If approved, New York would be the sixth and by far the most populous U.S. state to legalize gay marriage, and the vote would be a huge victory for the gay rights movement.


"For the good health of all the members and our guests that are here, we apologize but we will be adjourning," Senate Majority Leader Dean Skelos told reporters late on Thursday.


Skelos said Republican senators would privately discuss the bill to legalize same-sex marriage on Friday and whether a vote should be taken on the issue.


Republicans hold a narrow majority in the Senate and have been holding out for exemptions to same sex marriage for religious groups opposed to gay nuptials.


The sticking point for some Republicans is whether exemptions should be extended only to clergy and some religious groups or to any organization or individual with a religious objection to same-sex marriage.


A trio of Republican senators met several times this week with Governor Andrew Cuomo, a Democrat who has made same-sex marriage a top priority this year.


The group includes Sen. Stephen Saland, a highly respected Senate veteran from Poughkeepsie, whose vote could have a domino effect on his undecided colleagues.


"There's no middle ground. If you get it wrong, you expose our religious organizations to litigation, and we shouldn't do that," Lanza told reporters this week.


Cuomo on Wednesday told reporters he remained optimistic lawmakers will come to an agreement on religious protections and pass the measure before they break for a lengthy recess. They could leave Albany as soon as Thursday night.


Compounding the issue is the state's influential Conservative Party, which often cross-endorses Republican candidates but has threatened to withhold endorsements from any lawmaker who votes in favor of the marriage bill.


While the bill technically needs just one more vote to pass the 62-member Senate, some political analysts speculate that no single senator would be willing to cast the deciding vote.


"If there is an announcement prior to the vote, it will not be just one senator. No one wants to be the 32nd vote," said Dan Weiller, a spokesman for Empire State Pride Agenda, New York's largest gay-rights group.


Sen. Jim Alesi of Rochester, the first Republican senator to express support for same-sex marriage, predicted last week that the measure would pass with 35 votes.


Bruce Berg, a professor of political science at Fordham University, said the small number of social conservatives in New York and growing public opinion in favor of gay marriage could shield the undecided senators.


"The big issues are the budget, the economy, jobs and taxes. If Republican senators can vote correctly on those issues, they may be given a pass" on same-sex marriage, Berg said.


A recent Siena poll found 58 percent of New Yorkers are in favor of same-sex marriage.


Same-sex marriage is a key national social issue as the country moves into the 2012 presidential campaign.


President Barack Obama held a political fundraiser with New York's gay community on Thursday evening. Obama told the gathering that same sex couples should have the same legal rights as other couples but he stopped short of endorsing gay marriage.
Posted by Eddi Haskell at 12:04 AM