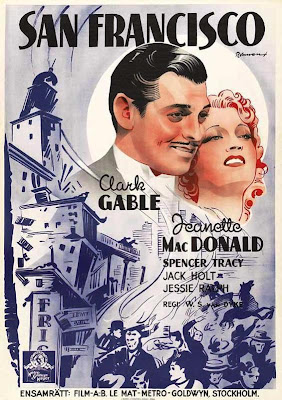 If any one movie could capture the soul of a city it is 1936's classic earthquake movie San Francisco starring a very handsome Clark Gable at his prime, Spencer Tracy as a priest (what else?),  and an incomparable Jeanette McDonald. 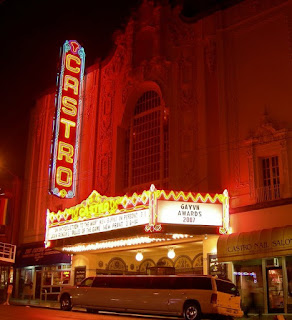 There is only one place really to see this flick, the classic Castro Theater on famous gay Castro Street. They play it once a year, and have an organ concert before the showing.   I used to live  two blocks from Castro and 18th street which is about as gay as you can get. To being with, check this credit out in the beginning of the clip below in the credits.  The reference to San Francisco being a "queen among seaports" has the crowd rolling in the aisle right in the beginning. 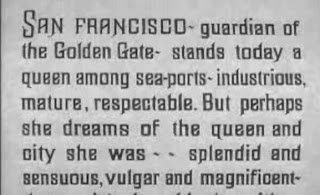 The movie is also remembered for Jennette McDonald singing "San Fransisco", one of two official famous San Francisco Songs together with Tony Bennett's classic ballad "I left my heart in San Francisco".  However, this song captures the spirit of the city best. The slightly less campy version at the second half of the video below really is sung better, and is played whenever San Francisco wins a major sport championship, like when when the Giants won the World Series last October.


The most famous single scene in the movie is the  Earthquake Scene (the best ever done).
The 1906 Earthquake was a devastating 9.0 monster that killed hundreds- the official numbers were never released. The entire downtown of the third largest city in the United State was destroyed at the time- and caused an uncontrollable fire what wiped anything else left standing. You can see the earthquake scene here
There are other great scenes in this movie which you simply must see if you have never had the pleasure too. Steve Hayes, the "Tired Old Queen at the Movies" did a superb review of this movie which you can catch below: