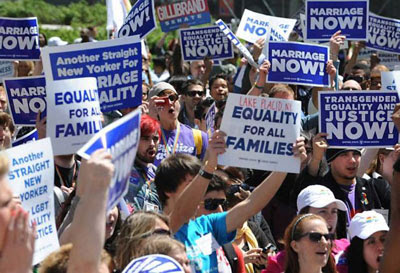 It is coming down to the wire in New York.  The Republican-controlled State Senate may allow a vote for marriage equality to occur later tonight or tomorrow. Even though only a few Republican Senators support the bill, the Republican caucus maybe be willing to put this to a vote out of fairness and decency, and also the fact that the Republican mayor of New York City, billionaire Michael Bloomberg really wants this to pass and and has contributed to many of these Senators election efforts in the past (hint - hold it up and I cut off my check book LOL).

The scene in Albany, the state capitol of New York is this right now. Gay-hating religious fundamentalists are having prayer marathons and singling all sorts of quaint fundamentalist songs and threatening any Republican who votes for the bill as best as they can.

On our side, the side of fairness and decency, the song that the pro-gay marriage side is singing is a song that that has been sung in the United States over the past 70 years to celebrate democracy, freedom and equal rights  It also can be sung loudly and is probably irritating the hell out of the ring wing bigots on the other side.

It is God Bless America, a song written by famous composer Irving Berlin, an immigrant who also wrote White Christmas and many other famous songs. It came into prominence in the late 1930's as a rallying song against fascism and isolationism, and to support the British people when they stood alone against Hitler in 1940. In fact, it was so popular, it almost replaced the Star Spangled Banner as a new national anthem during World War 2. 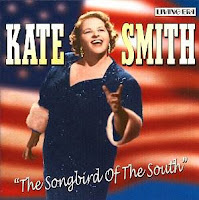 I am running it here, in the hopes that American will be blessed with another 19 million people living in a State where LBGT people can legally marry.

So here, it is, God Bless America. Corny, I know, but I really want this bill to pass -- and we can use all the help we can get.  Kate Smith is singling of course, a song that she will always be associated with.