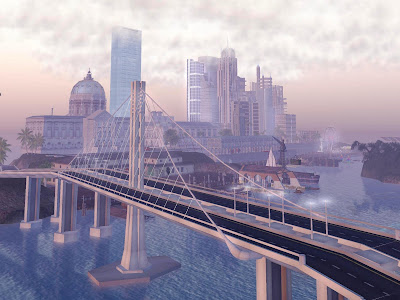 Although I am still researching this, Wendell Thor has sent out this note card late on Sunday night.

The San Francisco sims are a major Second Life gay destination, and home to Second Pride this past May.

It is with great sadness that I am writing this letter.

For those of you who do not know Dam Bamatter, he is a selfless giving man whose only intent is to bring together a community of people to enjoy a better life together who never asks for anything in return but to see joy on peoples faces... For the past two years he has out of pocket spent over $10,000 USD a month to ensure that everyone in this community has had a place to live, to party , to play, never once complaining. He has contributed to the Gateway by buying two sims for new residents to live on freely, he secured the entire Gay Archipelago's FREE move so that we could all be in the same area and live in a community, only to see his efforts go to waste when the Lindens decided to close the gate way that everyone had worked so hard to build.

Undiscouraged, Dom has continued his fight for the Gay Archipelago's right to have an area that the Gay Community could call their own and be free from the homophobic actions of the many people that unbelievable still exist.

Realizing that trying to negotiate with the lindens for our own space was a losing battle. Dom had another vision. if they won't made a space for us, why don't we make a space of our own. The Gay community is filled with the most creative and innovative people on the planet, why waste time where it is obvious that we are not going to be recognized for our true value. Out of his pocket again Dom invested over $150,000 USD to create a world for the community, a place that everyone could afford without having to scrimp and save in order to pay just to enjoy a higher quality of life. On a mission to create a world that not only was affordable for everyone but focused on the very things that we all complain about daily, lag, crash, the cost of lindens, inventory loss and the list goes on Dom has spared no expense in oder to achieve that goal. Not for him ..for us all.

Sadly to say , often the people who are the most giving are the ones most unappreciated. You would think that a company like the Lindens would show appreciation to someone who spends thousands of dollars a month on their products. Time and time again , the Lindens have lost cashiers checks for tens of thousands of dollars, rang up the wrong charges or just forgot to process payments, yet Dom wanted to made sure that everyone was taken care of no matter how it needed to be juggled.

Today because of an error in the Linden's billing system, whether it is intentional or not is undetermined, Linden Labs has chosen to terminate Dom Bamatter's account with no warning, locking him out of SL from his friends, from his property, from his lover. They have erased him from his groups that he has worked years to build up as if he did not exist. Demanding thousands of dollars to reactivate his account due to an error by Linden Labs.

As it stands right now, all the effort and time and money that everyone has put into making this place a successful, fun environment is going to be closed. After all the money that has been spent, Dom cannot even sell his sims because he cannot log onto Second Life as his account has been terminated.

All tenants who have an outstanding rental balance will be refunded the remaining amount of their rent. More information regarding this process will be provided over the next few days. Please understand that given the large number of people this will affect, it will take some time for refunds to be given, but you will be paid back any rent balances on the date of closure of your sim.

Gay Nations may be a new venture but it is one that is built on hard work and devotion and so you may not have hair or walk like a noob for a couple of days, but look around you at what has been built, is it really worth giving up what we as a Community stand for over a few prims of hair or toys that can be erased with the click of a button. I for one am proud to take a stand beside Dom and forge ahead into unknown territories in search of equality and freedom for all...