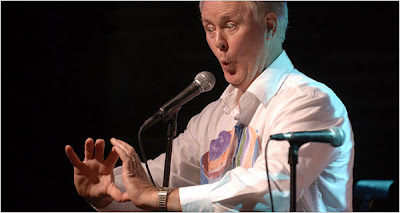 Jago turned me on to this this morning. In case you have not seen it (this has gone viral on You Tube), iconic  John Lithgow read an actual press release that the New Gingrich for President campaign released on May 18 on the  Colbert Report  last night.  The press release defending the hapless Republican candidate for President of the United States in 2012. It seems that Newt is under attack for speaking the truth! Talk about dramatic!

This has to be the funniest thing I have seen this year.  You have to see it.

Just in case you are wondering-- the crowd can best be described as "liberal democrat" Obama supporters in the United States -- and the cheers of USA! are nothing but pure sarcasm.  It is funny.