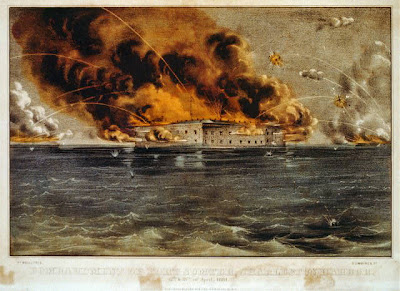 The United States Civil War, otherwise known as the War Between the States, began 150 years ago today. The Militia of South Carolina, part of the emerging Confederate Army attacked the United Sates military Fort Sumter in Charleston, South Carolina, opening hostilities. The war ended with a Northern victory, and the end of slavery, four years later, along with the assassination of President Abraham Lincoln.

The causes of the war are still being debated. Some say that the war was fought to end the slavery of African-Americans in the South. Others say that it was a war that was due to the South wishing to escape the economic supremacy of the North. Others say it was a war that was fought to keep the Union together. Whatever the reason, the Civil War was the most traumatic event in the history of the United States.

There were over 1 million casualties (out of a total United State population of 30 million, 10% of what it is today). Based on 1860 census figures, 8% of all white males aged 13 to 43 died in the war, including 6% in the North and 18% in the South, where these deaths are commemorated to this day.

Suprisingly, this date is not being played up much in the United States media.  Most Americans do not want to be reminded that not that long ago in the broad scheme of things the cruel and barbaric practice of slavery was tolerated in the South, and that it took a bloody war to end it.  The showing of the Confederate Flag, the Stars and Bars, is considered in very bad taste in much of the United States, even Southern States, which are not displaying it much these days -- except in a few places like South Carolina where a version of the flag flies over the Statehouse.