A Blast From the Past: Eddi as Rubbercop in 2007 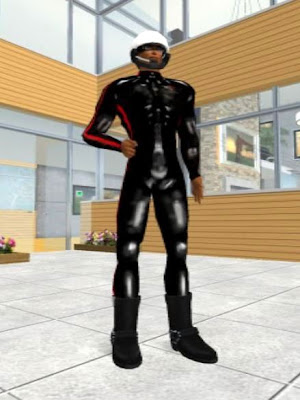 Way back when I first joined Second Life in 2007 I decided I wanted to be a Second Life Superhero.  I did not want to be a standard Superhero -- I wanted to be one of my own design, and one that would enforce Second Life morality against perversion and other crimes.  So I invented Rubbercop and spent a good amount of time back then flying around Second Life and making sure it remained a wholesome environment.

Rubbercop has superpowers, such as the ability to break into anyplace by turning his body into a thin sheet of rubber. He also had the ability to say really sarcastic things to people when they were in compromising positions and situations. I still have my Rubbercop outfit and might make an appearance at a party or as a club host if I am in the right mood one day.

Adonis Lubitsch lived next door to me (actually this house was a studio) when this photo was taken almost four years ago.
Posted by Eddi Haskell at 4:01 PM