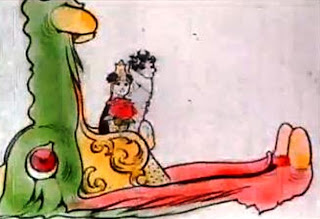 Little Nemo is the main fictional character in a series of weekly comic strips by the great cartoonist Windsor McCay that appeared in two New York Newspapers from 1905 - 1914. Although a comic strip, it was far from a simple children's fantasy; it was often dark, surreal, threatening, and even violent. . In the earliest strips, the dream event that woke him up would always be some mishap or disaster that seemed about to lead to serious injury or death, such as being crushed by giant mushrooms, being turned into a monkey, falling from a bridge being held up by "slaves", or gaining 90 years in age.

Take a look at this movie and imagine how groundbreaking it was 100 years ago.