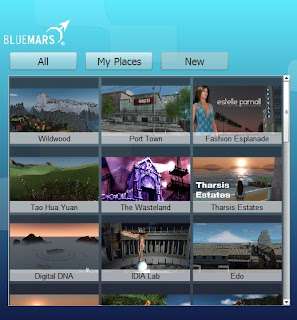 In a major announcement, Jim Sink, CEO of Avatar Reality, has announced that major development work will be suspended on the PC client version of Blue Mars and restricted to bug fixes, for the foreseeable future.

Instead, Avatar Reality will focus resources on Blue Mars Mobile, which will be geared for  portable touch screen devices like the iPhone and iPad.  The initial versions will be an extension of the current client that will  allow users to share their Blue Mars avatars through a native iOS (Apple iPhone) application with the ultimate goal of Facebook Connect integration.

There is one positive announcement for Blue Mars developers - the hosting service will now be free. Jim Sink has emphasized that servers will remain online, without technical support. The entrance cost into Blue Mars has always been reasonable if not free; Blue Mars needs to announce how the purchasing of "real estate" will now be handled.


Jim Sink has also announced that he and almost all of the Blue Mars staff that were working on the current pc rendition are leaving effective today.
-----
My First Take:
For all intents and purposes, Blue Mars is now out of the large scale pc-centric Virtual World business.  Stopping development on a platform cannot be sugar-coated.
This announcement did not have to be negative.  The new Blue Mars (Blue Mars mobile) will be browser-based, with a very lightweight client. What they could have said -- and did not -- is that Blue Mars will now focus work exclusively on a browser-based application (much like Second Life did in mid 2010 to explain a similar diversion of resources in laying off staff). Instead, Avatar Reality wishes it to be known that they are finished with trying to support, market, and develop a virtual world that is way ahead of its time in consumer and organizational acceptability.  It is obvious from the announcement that they were losing cash at a very rapid rate.
The real reason for this announcement is that Blue Mars has not yet earned substantial payback for the large investment that was made in a highly advanced platform.  It is very hard to gain investment capital now for any Virtual World application due to the the failure of first - generation entrants (with the exception of Second Life) to earn substantial income.
In addition, Blue Mars is empty. I put the number of repeat users at under 5,000.  I am a heavy user (I love the imaging), and I rarely see anyone in there outside of three or four "regulars".  It  would take a huge amount of content and activity investment for Blue Mars to come anywhere near what Second Life has to offer.
I do not think any major organization, and many were considering doing so,  will now enter the current Blue Mars platform. I am not sure that they can be convinced to buy off on the new mobile application. Blue Mars has been very successful in gaining a handful of high-quality developments for universities as test beds which are now operational -- including IDIA labs from Ball State Univeristy and the OnLand development from Tesside University, all of which must be considering the efficacy of future investments based on today's announcement.
What does this mean for Linden Labs and Second Life?
The Virtual World market is Second Life's right now.  They will not have a graphically rich competitor breathing down their necks for crucial institutional, educational, and mainstream business investments.  If Linden Labs, parents of Second Life can gain the business that is now evaluating Blue Mars, which includes according to some reports the huge U.S. Smithsonian Institution, they can regain momentum in the virtual world arena.
It is also clear the Linden Lab's initial business model for Second Life -- let the users handle development, keep things as open as possible in terms of building and scripting, and minimal if any enforcement of internal content -- actually makes sense considering that large-scale professional content development, sales, and maintenance is very expensive.  Whether or not they can become a serious commercial or educational platform is still to be decided, but doubtful given Second Life's current rendition.
Please note:  This is my first take, and I may revise my analysis once I get additional information.
Eddi Haskell
Posted by Eddi Haskell at 5:35 PM