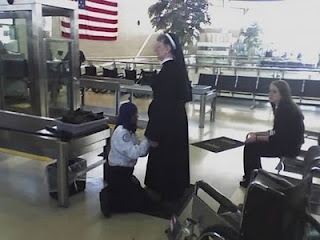 In case you have not been watching the news, for whatever reason, airport security in the United States has reached incredible proportions of privacy invasion. You can be felt up, including having hands placed in your crotch area, be strip searched, and basically be humiliated and violated along with having your privates hurt by aggressive pat-downs.

Take a look at this nun above being frisked in front of everyone. Disgusting. She does not look like she fits a terrorist profile, does she?  Can you imagine how humiliated she feels?

Airport security contracted out to private companies in the United States for the most part.   They follow guidelines from the government Transit Security Administration.  Here are the latest guidelines:

"The Transportation Security Administration has a new pat-down procedure that includes a security worker running a hand up the inside of passengers' legs and along the cheek of the buttocks, as well as making direct contact with the groin area". 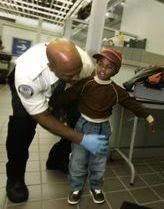 This conduct would be seen as going too far in any Amsterdam dark room.  But at the airport?  Who exactly came up with this?

Recently, I experienced pain being searched with a metal prod. This happened to me in San Fransisco;  an overly aggressive agent smacked me in the crotch area with a metal detector and it hurt like hell.   I had to file a complaint with his manager after raising my voice quite loudly.  Three managers ran over to me trying to calm me down.  Next time they pull this I am going to fall to the floor in agony and request a trip to the emergency room and sue them to hell.

A bladder cancer survivor was so aggressively searched he was covered in his own urine due to a hard pat-down.

I just noticed this on YouTube.  A young boy, about 6, is getting a strip search at an airport security check. He had to take his pants off to appease the agents. If this were my kid, I would be explosively angry. No one should feel up a little boy period and ask him to strip.

This week is the busiest travel week in the United States. Tens of millions of people travel to be with family during the Thanksgiving holiday this Thursday.   At O'Hare airport in Chicago the wait for security is now over 500 feet long according to news reports. This means your wait for security can take well over one hour.

Citizens group are calling for a protest day of Wednesday in the United States, the busiest day of the year in terms of travel.  If you are flying that day, show up up REAL early to make sure you make your flight.

Sometimes things go to far. But reading new reports has me angry as hell.

I do have one suggestion for LGBT readers here.  If any agent  gets too aggressive with their hands, say "Fresh" at the agent and wink.  Then at the top of our lungs yell out "next time you are getting a real big kiss for that special grope sugar!"  That will keep them off balance.
Posted by Eddi Haskell at 2:58 PM