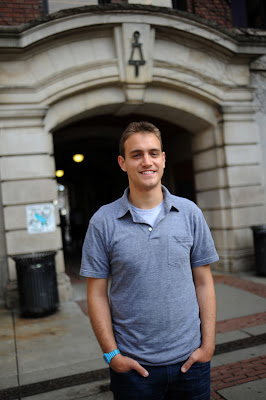 I have been asked by a reader to post this rather unbelievable video.

My alma mater, the University of Michigan, elected its first gay Student Council President this year-- the very handsome Chris Armstrong. Since Michigan is one of the most progressive universities in the United States, and is in the gay mecca of Ann Arbor, this is no big deal.

What is a big deal is that the Assistant Attorney General of the State of Michigan, Andrew Shirvell,
has declared war on Chris because he is gay, has put up a very negative blog about Chris, and has been harassing him on the college campus.  He has since received a restraining order, but has not been fired from his job. What is so strange is that Mr. Shirvell, who seems to me to be an obvious closet case, has never met and does not know Chris Armstrong. He is obsessed with him, and other bloggers have commented that he very well may be in love with Chris.


This is scary -- harassment is resulting in teen suicides. However, Chris seems stable enough to not be affected by his new found "fame", and seems to be handling the six months of constant harassment well.

Take a look at this interview from earlier this month on Andrerson Cooper's show.  Unbelievable that Mr. Shirvell still has his job, and that a nutcase like this can actually be a state prosecutor.