Spartacus,  the greatest of the epic gladiator movies starring a very cleft-chinned Kirk Douglas premiered 50 years ago today.  It is also notoriously camp and overdramatic judged by today's standards.  It won four Oscars, including a best actor in a supporting role for Peter Ustinov. 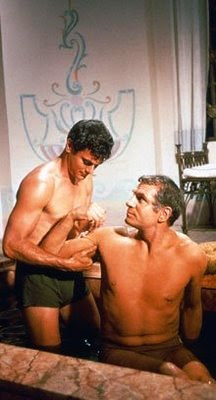 Spartacus is famous for a bathtub scene excised before the film's 1960 release in which Laurence Olivier's character comes on to Tony Curtis's innocent slaveboy Antoninus (above) with the line "Some people like oysters, some people like snails. I like oysters and snails." The scene is now part of later releases of the film.