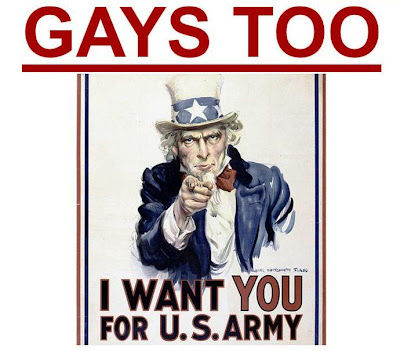 Although it is expected that the Supreme Court of the United States, or one of its appellate divisions, is likely to put a stay on this, as of today, the pentagon has issued guidelines allowing gays and lesbians the right to join the armed forces.

Even if the courts put a temporary hold on this (in a bizarre twist of legal policy President Obama's administration will try to get this overturned until a congressional resolution is passed supporting this), the handwriting is on the wall -- one of the last, and greatest discriminatory policies against gay Americans is now falling.

This wheel keeps turning. Meanwhile, gay and lesbian  servicemembers currently in the military have been advised not to come out of the closet by the Servicemembers Legal Defense Network. Their Executive Director, Aubrey Sarvis, said that while all of this action is good news, it's still too early to celebrate.John McCain, the Republican senator from Arizona who ran for President against President Obama has announced his intention to filibuster another vote allowing congressional approval.
The United States is one of only a few non third-world countries which has banned gays in the military through the bigoted Don't Ask Don't Tell directive.  It is about time the United States join the modern world and allow the thousands of gays and lesbians who wish to serve their country the right to do so.
Posted by Eddi Haskell at 8:48 PM