Classic Cinema: Fasten Your Seatbelts: All About Eve Premiered 60 Years Ago 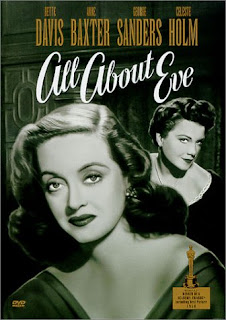 All About Eve, the campy and bitchy movie that film legend Bette Davis will always be remembered for, premiered 60 years ago tonight. Bette Davis played the aging Broadway actress Margo Channing,  Anne Baxter plays Eve Harrington, the younger fan who threatens to take over her entire life.

All About Eve was nominated for 14 Academy Awards (a feat that was unmatched until the 1997 film, Titanic) and won six, including Best Picture. As of 2010, All About Eve is still the only film in Oscar history to receive four female acting nominations (Betty Davis and Anne Baxter as Best Actress, Celeste Holm and Thelma Ritter as Best Supporting Actress), and is widely considered to be one of the 20 top American movies of all time.

The trailer features an interview with Ms. Davis:

Here is the most famous line from the film, "fasten your seatbelts".  Marilyn Monroe has a cameo in one of her first films.