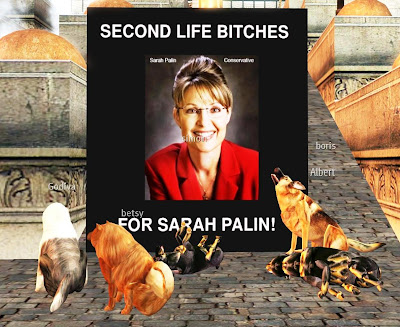 Jago and I have six VKC Kennel Dogs. They are all wonderful but the most famous one is Albert, the German Shepherd who behaves as if he is on ketamine all the time.

About one year ago, Albert decided to publish his own blog, Albert Loves Sarah Palin, which has since changed it's name. I argued with him, since I am a hard core Democrat, but it did not help. Since, like many tea party members his brain is fried half the time, I did not bother to ask him why.

Strange but true, last year,  Sarah Palin's blogging association  badged Albert as one of 63 official Sarah Palin bloggers across America. When they found out that he was leaving "inappropriate comments" on other blogs they expelled him and demanded he remove his badge. He refused, with his famous quote "TOUGH DOGBISCUITS!"  And he decided Sarah Palin was evil because she hunted his relatives - wolves - from helicopters.  Even a German Shepherd on ketamine can figure that one out! 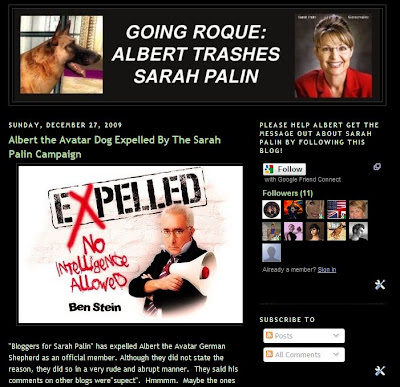 In addition to the blog, Albert produced a YouTube Video called "Albert Loves Sarah Palin", and started the group "Second Life Bitches for Sarah Palin".  I am showing the video here.

You can follow the history of Albert's campaign for Sarah over at this blog Going Roque:  Albert Trashes Sarah Palin.

Albert promises to pick up his blog again once (and if) Sarah Palin announces her plans to run for President of the United States sometimes in 2011.