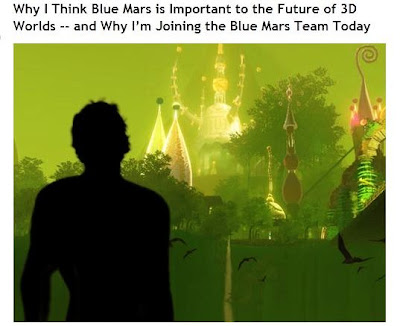 
He announced this today in New World Notes:


"I’m excited to announce that I’ve joined Avatar Reality, the creator of the next generation 3D world Blue Mars, as a consultant. Of course, my avatar is coming too. Even better, New World Notes style writer Iris Ophelia is also joining me, to cover the best in Blue Mars fashion. Follow us in "Blue World Notes", a daily feature now launching on the Blue Mars blog."

This seems like a great match, Blue Mars is making great progress as they get ready to leave their beta phase after one year of successful concept and technology testing. I want to wish all parties the best of luck.
Posted by Eddi Haskell at 7:48 PM