If there is any common "theme" from my ongoing trip to San Francisco, it is total pig-out. Granted, food is good in Florida where I live - especially Cuban (one of my favorites) and all the good sea food that hopefully is not tainted by gulf oil spill clean -up chemicals.  Florida food however cannot compare to this place. Quite simply, San Francisco is one of the very best places in the world to eat out -- right up there with such famous eating cities such as Antwerp, Belgium, Hong Kong, New Orleans, and Sydney Australia.  In fact, I will rate it number one simply for the sheer diversity of what you can eat.

In the 9 days that I have been here,  I have pigged out on incredible Vietnamese, Chinese, Pakistani, English, Turkish, French Mediterranean, and Japanese food and have much more to try.  I am amazed that I can fit in my clothes, because I have not stopped eating. I am probably staying trim by walking around in the amazing cool ocean air -- going outside and not dripping sweat after 10 minutes like I do back home in South Florida.  This may explain why people are not mistaking me for a taxi cab when viewing me from behind. 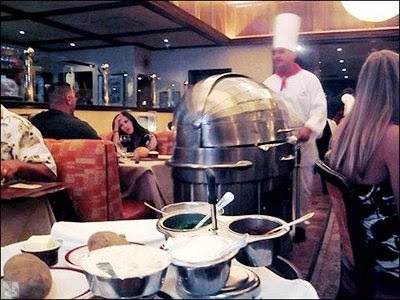 Pigging out at the House of Prime Rib in San Francisco
On Monday, the Labor Day holiday, my friends and I ate at one of my favorite places in San Francisco - The House of Prime Rib on Van Ness Avenue. This restaurant looks as if it has not changed in over 50 years. All they serve is amazing  prime rib roast beef, every bit as good as what you can get in the U.K..  You usually need to make a reservation way in advance. All they serve are slabs of prime rib, yorkshire pudding, mashed or baked spuds, and spinach.  Couple that with a good local Cabernet or Merlot, and you have one of the best meals of your life. I ordered the enormous King Henry 8 cut which I managed to inhale in about 10 minutes. Yum!

Today, I ate at another one of my favorite restaurants in San Francisco with my good friend Eddie (yes, another one).  Ed, who I always call Eddie could very well be the best looking man in San Francisco. I have not seen him in three years and forgot how handsome and fit he is-- you would look good too if your  major activity all day was picking your kids up from school, cooking  everyone dinner,  and going to the gym so your personal trainer can have you at 4% bodyfat and perfectly proportioned. Eddie is also the most successful friend I have, he is a dot com millionaire who sold his company to one of the large software companies which explains him having the time to looks so good. Some people have all the luck! 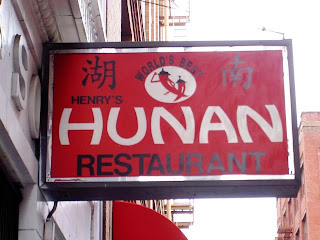 This is such a yummy restaurant!
Eddie and I ate at Henry's Hunan. Hunan food emphasizes things like hearty smoked ham, great beef, hot peppers and sauces -- it is really good and filing. My mouth was burning after eating all those peppers, and I can imagine what I will feel like later when they burn their way through my system tonight. 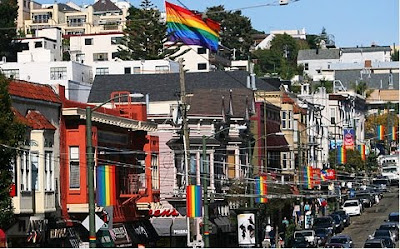 The Castro -- no longer as gay as when Harvey Milk owned his camera shop here. .
After lunch, Eddie offered to take me for a drive around the city. We drove by the gay heart of San Francisco, Castro Street, which seemed less gay then it did three years ago. The same bars and stores were there - but unless someone pointed out the meaning of the rainbow flags, I don't thing anyone would realize significance of the place. Eddie told me that the Castro was becoming just another mixed San Francisco neighborhood.  He also told me that he could no longer take his kids to the store "Does Your Mother Know" because it has become "leather kinky". We did not get to discuss that that meant. 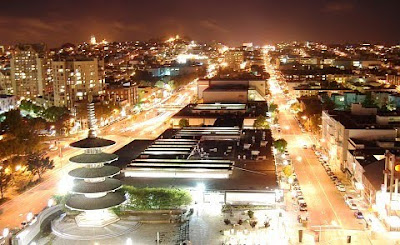 Eddie dropped me off at my friends apartment in Japantown where I will be staying through next week. I have this huge apartment to myself and would invite all of you to come up and party for the weekend if I could! I am going to be heading down to Sony Center today and checking out the action downtown.

I should be back in Second Life in about a week when I get back.  In the meantime, thanks for reading!

Eddi
Posted by Eddi Haskell at 6:50 AM

Email ThisBlogThis!Share to TwitterShare to FacebookShare to Pinterest
Labels: travel