Report From San Francisco: Coping With The Great Recession 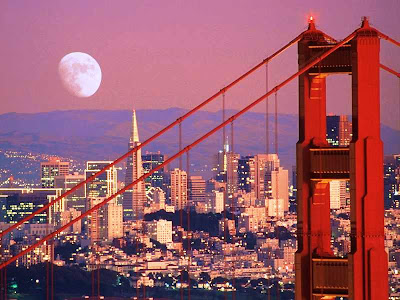 I have been visiting friends in San Francisco since September 1 and will be staying here another for another week. The last time I was here was in December of 2007, an absence of almost three years. I lived here for a while and know the city quite well.   What amazes me is how much things have changed.

San Francisco is still gorgeous and beguiling. The huge Mission Bay development, noticeable as you drive in from the airport, is a massive new City-in-a-City that I do not think has anything that can compare in the United States. Everything is still here --- but things seem very different. San Francisco is showing the signs of a bad economy in a big way. 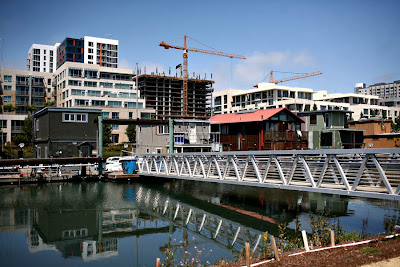 For those of you who know San Francisco, I am staying at the huge Holiday Inn on Van Ness and California. I managed to get an amazing deal -- 8 nights in a deluxe room, round-trip airfare from Fort Lauderdale on Jet Blue, and cancellation and travel insurance, all for a bit over $900.00.  Speaking of Jet Blue, it has to be the best domestic airline in the United States, with really comfortable seats that I as someone over six feet tall did not feel compressed in. It is now my airline of choice.

Half of the people in the hotel are visiting tourists from Germany; you can tell who they are since there is some sort of Sauna here and they are ones who are virtually naked in the elevators with one towel wrapped around them as they go back and forth from it. I forgot how incredibly cold San Francisco can be in September; in the mid 50's with the ice cold fog blowing in every afternoon at about 20 miles per hour from the Pacific. You will do anything to keep warm in this place. 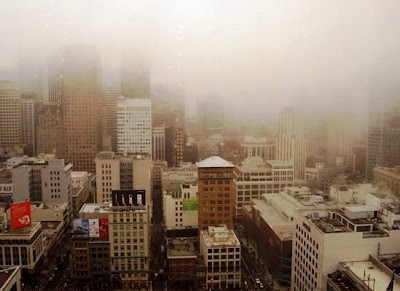 The Summer Fog Rolls In -- Its Freezing!

The city itself (an old boss once pointed out that only Manhattan and San Francisco call themselves "The City") looks and feels very different.  It seems to me that The Great Recession has hit San Francisco hard. Unemployment in July was at the national average, 9.7%. Things seem worst than that -- there are more homeless people on the streets, and they seem more resigned to collecting fewer handouts. Urban ultra-grunge seems more "in"; I am staying near one of the most sleazy streets in The City - Polk Street, the original gay street in San Francisco before the action started moving to the Castro in the 1970's.

Polk Steet then made a metamorphose into "hustler central"  before that business was killed by the internet in the late 1990's. Now, at night, you try to avoid it, since the drug addicts seem to have taken it over. My friends tell me that The Tenderloin, which I am near, the area north of Market Street and the most run down area in San Francisco downtown, has become very dangerous with a high violent crime rate.  I remember feeling safe walking around anywhere here, and I have been warned that this is simply no longer the case at night. 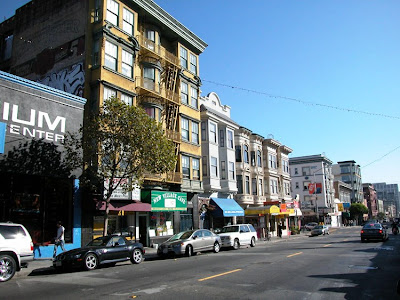 Polk Street now has about 10 good Asian and Middle Eastern restaurants on it, and some friends took me to one of them, Shalimar, a Pakistani place, that  is so amazingly good and cheap it made the Travel and Leisure top 50 list. One thing about San Francisco is the amazing variety of the food. This week we are superb Moroccan, Vietnamese, Sushi, Hunan Chinese, and Pakistani food -- and there is much more to try. It seems to me that prices are not that high here, and one can east a great dinner for under $20.00 with tip.

I cannot tell the difference between the homeless people, drug addicts, and hipsters in my area who line up outside Kimos, one of San Francisco's first gay bars, on Polk and Pine Streets to go to the upstairs bar to hear great alternative music. My friend told me that they were one and the same these days, something I have to mull over.

We did go to the Symphony one night and heard the amazing San Francisco Symphony get ready for their annual European tour. Their conductor, Michael Tilson Thomas is probably the greatest living American conductor these days; the fact that he has lived with his male partner for many years means nothing in this city.  Despite the Great Recession, the place was nearly sold out. They played Mahler, a specialty of theirs, and the concert was really amazing. They have won 8 Grammy Awards for their Mahler cycle-- one of the few you can buy in modern sound. I recommend you start with Symphony number 5, the one I heard, with the famous Adagio from Death in Venice if you want to get started appreciating this great composer. 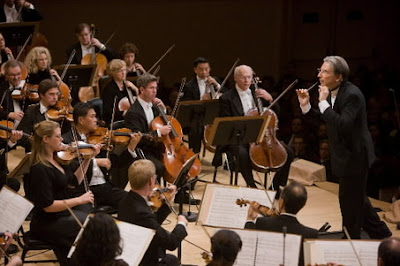 I plan to go out this weekend to some clubs and Castro Street, the heart of Gay San Francisco to see what that is like. I am heading off downtown now, South of Market, and can't wait to see the changes made there.
I have not logged into Second Life this week but will be spending more time inworld on about September 20.  I am blogging though, so I will keep you up to date on my travels.

All the best, Eddi
Posted by Eddi Haskell at 1:37 PM

Email ThisBlogThis!Share to TwitterShare to FacebookShare to Pinterest
Labels: travel