You Tube: Will Arcadia Be the Killer Application for Blue Mars? 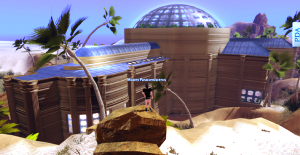 Irish Philip James Bryan, known as Dude Starship on Blue Mars, is one of the biggest believers and proponents of this new virtual world, which will celebrate the first birthday of its beta release on September 2.

He has produced a huge number of videos which you can check on his well populated You Tube channel.

Arcadia is a region on Blue Mars which Philip has told me is it's future. Besides having a gorgeous central research center which is the most stunning single building on Blue Mars, and an equally impressive landscape,
is the home of a very cool "game" - that pits teams of researchers who I think try to determine Martian life evolution based on archeological finds. I am not a gamer, but I just might be, since Philip raves about it.

I have not been able to figure out how to get out of the central boneyard- but Philip has in this brand new video.  Philip does not overly edit his machinima (gaming videos), and shows the Blue Mars interface- something I edit out.

Here is what Philip has to say about the video:


"Exciting stuff. The video is self-explanatory. What happened was that I found a hyole and told others. Sister JamT followed and found the old Arcadia. Then they installed a teleporter and we can get in. Sister and Dafney and King went in overland. I haven’t managed that yet. But I will, I will . Heres the vid."

Please note:  The beta anniversary of Blue Mars is September 2 and I will write more about it on that day.