How Can The Tea Party Insult This Memory of This Great Man with Their Rally Tomorrow? 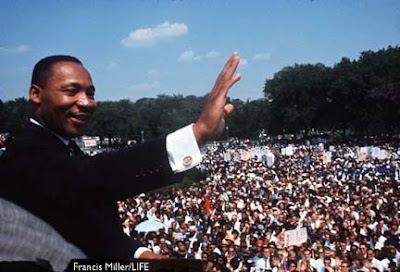 I do not usually like to comment on politics here unless they pertain to international LGBT issues, since so many of my readers are interested in them.

However, because of an event that is happening in Washington D.C. tomorrow, I am making an exception.

The right-wing tea party movement in the United States, led by right-wing commentator Glenn Beck, are insulting the memory of assassinated American Civil Rights leader, Martin Luther King by holding rally on the same location and anniversary of his greatest speech. in Washington D.C..  We can expect to see signs emphasize subtle racism against people of color, hatred of LGBT people, people of Hispanic descent, and Muslims.

What is so bad about this rally is the location and timing. They have picked the 47th anniversary of the most famous event in America  civil rights history, the 1963 March on Washington, and at the same location, the Lincoln Memorial, to hold their rally.   It was at this March that the father of the modern civil rights movemet,  Reverend Martin Luther King,   delivered his most famous speech, "I have a dream", to over 250,000 people. Some people born as slaves were still alive at the time of this event.

The way it was in the Southern USA when Martin Luther King made his speech. 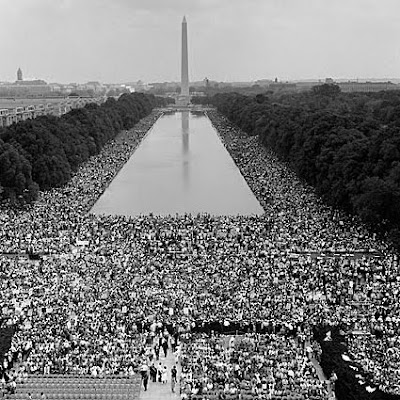 Martin Luther King, assassinated in 1969, had a national holiday to celebrate his life and remind Americans of our progress in civil rights - and what still needs to be done. His speech, demanding freedom and racial equality is considered one of the greatest speeches every delivered in the English-speaking world, and is something I urge all of you to listen to if you have not heard it. I am posting a short 3 minutes version here. It is inspirational.

Here are some highlights from the speech:

"I have a dream that one day this nation will rise up and live out the true meaning of its creed: 'We hold these truths to be self-evident, that all men are created equal".


"I have a dream that my four little children will one day live in a nation where they will not be judged by the color of their skin, but by the content of their character."

"Let freedom ring. And when this happens, and when we allow freedom to ring—when we let it ring from every village and every hamlet, from every state and every city, we will be able to speed up that day when all of God's children—black men and white men, Jews, and Gentiles, Protestants and Catholics—will be able to join hands and sing in the words of the old Negro spiritual: "Free at last! Free at last! Thank God Almighty, we are free at last!"


For a full length version of this speech:  http://www.youtube.com/watch?v=PbUtL_0vAJk