It's France's National Holiday Today. The Singing of La Marseillaise in the Movie Casablanca. 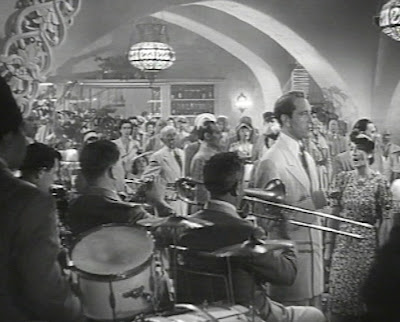 July 14 is the national holiday of France, Bastille Day, celebrating the storming of the Bastille, a prison, during the French Revolution of 1789.France celebrates this day with huge fireworks and patriotic displays of the French flag, the tricolor, with a sense of style that few other countries can match.

Playing this song in a country under German occupation (actually Morocco was run by the hated Nazi allied Vichy French) was a serious crime - making the scene even more thrilling. BTW, that is Humphrey Bogart and Ingrid Bergman in two of their most famous film roles. When this film was shown in the United States in 1943, the movie audience would rise, those that knew the words would join in the the singing, making for a very emotional scene.

By the way: Do you blame the Nazis and their Vichy French collaborator puppets for making this song illegal?  Here are the words of the first stanza they are singing (the song gets more violent).  The crowd, in the club, given half a chance, psyched up by the music, would probably slit the throats of the hated occupying Nazi soldiers.

Not to worry, Europe has come a long way in the past 70 years, and needless to say, the French and Germans are very friendly to each other these days.

Arise you children of our motherland
Oh now is here our glorious day!
Over us the bloodstained banner
Of tyranny holds sway!
Oh, do you hear there in our fields
The roar of those fierce fighting men ?
Who came right here into our midst
To slaughter sons, wives and kin.
To arms, oh citizens!
Form up in serried ranks!
March on, march on!
And drench our fields
With their tainted blood!

I am also showing a color version of   Mireille Mathieu's legendary performance of La Marseillaise, from the 1989 bicentennial of the French Revolution. The Eiffel Tower is in the background.  The restored color version has only just been made available on You Tube. No one has ever done as good a job singing this.