My Mother the Reverse Rosa Parks? 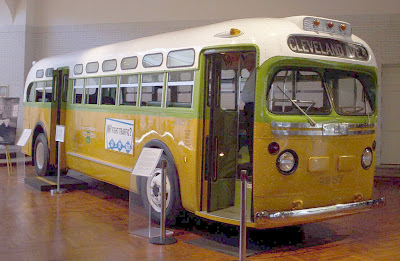 In case you do not know who Rosa Parks is, she is considered to be the mother of the civil rights movement in the United States. Why?  Until the passing of the Civil Rights Act of 1964 (the law that extremist Republican coverboy Rand Paul got into so much trouble with this week on the Rachel Maddow show), it was legal in the Southern United States to segregate people according to race. Although these laws started falling in the mid 1950's. people of African American ancestry had separate schools, restaurant areas, public conveniences, water-fountains, and other public items. There was to be no mixing of the races. These laws were called Jim Crow laws, and were allowed to stay into effect until 1965. Most famously, African American people had to sit in the back of every bus and street car in the South. 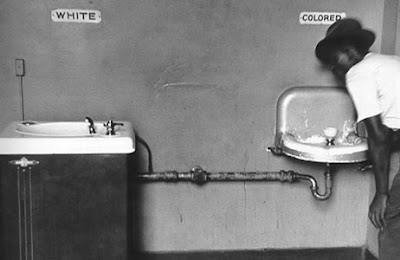 In 1955, Rosa Parks,a civil rights worker, refused to give up her seat  in front of the bus above in Montgomery, Alabama. Her action triggered a boycott of that cities busy system and laid the foundation for the huge rallies and work led by Martin Luther King in the 1960's. Rose Parks died in 2005 and was honored by laying-in-state in the U.S. Capitol Rotunda, making her the first woman and second African American ever to receive this honor. Every living President of the United States attended her funeral.

Now why am I bringing my mother up in the same breath as Saintly Rosa? 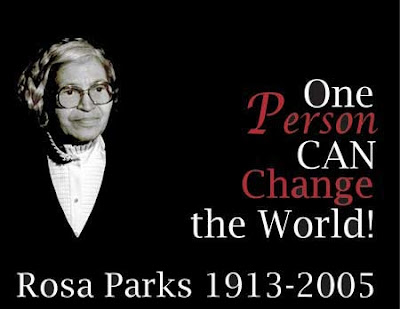 My mother came close to shutting down the bus system of El Paso Texas in the early 1960's shortly after she married my father. My parents were married right after my dad left the military, and settled in El Paso for a while since my grandparents lived there at the time.

My mother is a born and bred Manhattan-ite.  She is about as outspoken as any New Yorker can be. There were  never any Jim Crow laws in New York, and at the age of 21, my mother probably was not even aware that they existed in Texas.

My mom's story is this.  She had to take the bus downtown.  She hailed it, the bus stopped, and she sat in back of the bus. The bus driver did not move, and asked her to sit in front.  Here is how she reports the conversation with the driver.  Picture my mother as a Beatrice-Arthur type and the driver as a Texan with a really slow drawl.

Driver: Lady please sit in front of the bus.

Driver: Lady please move. I cannot pull the bus out until you sit up front.

Mom:  Why should I sit up front?  I like it here and I do not want to move.

An African - American lady then patted my mother's arm and politely showed her the sign that said Colored.
My mother STILL did not understand.  Sat there for a few minutes. And then said this after she finally got the message. She had never been in the South before.

Driver:  The bus cannot move.  And I need to phone the police.  I am leaving the bus now.

Mom got really angry and said something like this:  DRIVER!  I DON'T GIVE A DAMN! I WILL SIT WHEREVER THE HELL I WANT ON YOUR BUS. IF YOU WANT TO WASTE EVERYONE'S TIME BY CALLING THE COPS YOU CAN! I AM NOT MOVING!

Now, according to my Mom, the driver sat there and then surrendered.  He drove the bus away with her in back. He said nothing, and no one on the bus said anyting.  He probably saw the writing on the wall anyway and knew the law was about to fall in El Paso because it was falling in other cities.  They all tried not to look at my mother, some 21 year old broad from Manhattan with a really big mouth.

So, in effect, my mother desegregated the El Paso Texas bus system.

Now, my parents moved back to New York to live with their other inlaws shortly after a scorpion ran out of one of my mother's shoes.  She told my father she was leaving, and that was that. He followed her.

Just wanted to bring up this cool story to you!
Posted by Eddi Haskell at 3:28 PM