My Guy Won in the U.K. Elections - Meet Zac Goldsmith 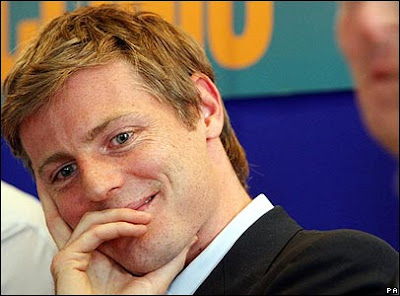 Last year, I told you about my candidate for Parliament in yesterday's elections - Zac Goldsmith who won in Richmond Park, the place where I am registered to vote in the UK. Zac just pulled an upset and won by a wide margin.  I like Zac because he is very pro-environment (he is founder of the Ecologist magazine), and very pro gay rights.  Although he is a Conservative (which means something very different in the UK than it does the United States) he was inspired by President Obama to enter politics. He answered my letter last year personally, and asked me to stay in touch with him which I think is a very nice thing to do.

Yeah, he is easy on the eyes,, but that's besides the point.

So congratulations to Zac for a great victory!

Article on Zac's upset victory:
http://www.guardian.co.uk/politics/2010/may/07/zac-goldsmith-wins-susan-kramer-clash
Posted by Eddi Haskell at 1:40 AM