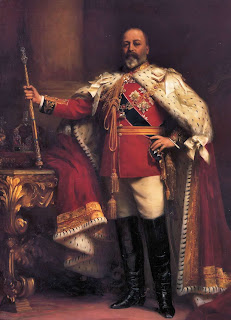 Although this day will not be noted by most, and by coincidence happens on the same day at the British Elections, the modern world began 100 years ago today. King Edward VII of the United Kingdom died on this day 100 years ago.

In the English speaking world, including the United States, and the British Commonwealth, the marking of eras of time is associated with the reigns of British Monarchs. Here are the past 4 eras. People who are in design, fashion, and the arts will recognize this.  Different historians may have somewhat different timeframes associated with these periods,

1740 - 1811. The Georgian Era. --- named after three German King Georges, including the last one, the mentally unstable (at the end) King George III who American schoolchildren are taught to hate because he was in power during the American Revolution.

1811- 1837. The Regency Era. It's complicated but King George was declared mad in 1811, and his son took over becoming head of state as Prince Regent. This era lasted until the advent of Queen Victoria in 1827, and is associated with Napoleonic Wars, incredible architecture, and some very nice furniture.

1837 -1901. The Victorian Era. Celebrated in Second Life in the Caledonia area, in New Babbage, and looked back as a morally conservative but very technology-focused period in which the foundations for the modern world were born.

1901 - May 6, 1910. The Edwardian Era. Called "the brilliant Autumn day" when Victoria's son , King Edward VII reigned with his Danish Queen Alexandra. The British Empire circled the world, and the Royal Navy enforced the peace. This period had exquisite fashion, saw the world in peace before the horrors of World War 1 and II began, and was a time when the English speaking world had a great belief in its own future dominance. King Edward VII was not really a figurehead, he was able to control his nephew, Kaiser Wilhelm II of Germany (he was the uncle of most of Europe's Kings and Queens) for by personally entering into a Alliance with that other great power, France without even checking with his own government if doing so would be OK with them.

After this, there are no more "ages" referred to as such. King George V and his wife, the very majestic and somewhat campy Queen Mary (check out my YouTube video), took power 100 years ago today- but do not have any age named after them. It is now the modern world, with all its horrors and advantages. Perhaps in some near distant future people will call the period after 1910 the American age or something or other. But for now, we celebrate the birth of the modern world 100 years ago today.

There is a wonderfully advanced movie shot considering it was recorded 100 years ago, on May 20, 1910 at the funeral of King Edward VII. The chimes of Big Ben are cool they date back from 1892, . I play it here.