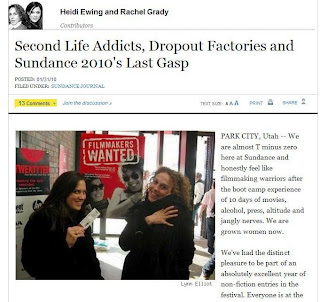 If I ever ask myself why I am happy to have been created gay I will look at this picture.

I just noticed this in Politics Daily, a major political web publication in the United States on Second Life, the "Life 2.0 film", and the Sundance Festival awardss tonight.

Another winner of a film is "Life 2.0" which reveals the phenomenon of "Second Life," a fascinating train wreck of a social experiment that is uncomfortably revealing about where we are as a society. People invent their avatar, and then actually build a second life online, where they can be anything they dream: rich, attractive, popular. A sexy, thin avatar named Asri Falcone is a mini-mogul in Second Life, building homes and living a life of luxury. Her creator is an obese Detroiter, chain-smoking in her mother's basement, but reality and fiction become hazy and confusing after 15-hour days in this alternative reality. I was alarmed at the millions of people that were spending the majority of their "earthly" time in this fantasy world. Extremely weird.

Here is what I have to say about my sordid Second Life existenceafter I spent several hours of my "earthly time" this morning finishing a fund raising effort which will raise over $100,000 Linden for Haiti Earthquake Relief.

2. OK, Second Life is a time waster for many of us granted. Now, how can you say that Reality Television, drug usage and alcoholism, or serial promiscuity (in plainer English being a slut and going out every night for a shag), as being better than Second Life as an "escape". Everyone needs "escapes". Why is this one any worst than any other?

3. You can make MONEY with this hobby, whether or not it is marrying people, building a home, making wallpaper, being an escort or whatever. What is so wrong with that? Not only that, you learn real-life skills here that you can apply to making money outside of SL. I am considering opening a real life photography and video business; I did not know I had a talent in either in Second Life (I might not actually LOL but at least I think it's worth a try).

4. Second Life is turning into a huge mechanism for fund-raising for charity, reaching people who usually do not or cannot contribute through other means. Yeah, this train-wreck of a social experiment does some good doesn't  it?

5. I personally know at least three people confined to a wheel chair in real life who have a great time in Second Life. In fact one is a major stud, and has a hell of a Second Life sex life. What is so wrong with this? Second Life is a wonderful mechanism that allows handicapped, isolated, and other marginalized people a place to socialize.

6. I conducted a wedding in Second Life last night. I married two very wonderful people who genuinely love each other. I do a wedding a week these days because I enjoy it, and make others feel good. And they are appreciative of what I do. If I am involved in a social wreck of a social experiment, at least I feel good about myself doing so.