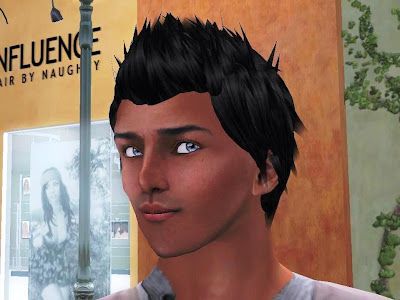 
I don't know what to do. I met this person in a club.  He said hi to me and I said hi to him.  He asked me if I wanted to become friends and I did.  I become friends with just about everyone who is friendly and asks me to friend them. However, this person then started stalking me --- IMing with me the second I log on and asking me what I am doing and this and that.  He seemed bothered when I told him I was busy.  But after two weeks I finally told him that I could not IM with him all the time, and that I could not be his best friend,.  I did tell him that I would say hello to him when I saw him around.


He then told me that everyone hates him, that no one has time for him because he is ugly (he is a very unattractive avatar, almost frightening), and that he would kill himself if no one spent time with him in Second Life.  I am afraid that he might.  But I do not want to get more involved than I am. What am I to do?  I am now afraid to log in because he will be there IMing me.

There are two problems inherrant in Second Life that we do not have in real life that are causing your kind heart this predicament and making you into a drama victim.

First, Instant Messaging, as I have said earlier, makes you captive to people's communications unless you go on busy, ignore them, or mute them. This is frequently a hard thing to do.  This person could not just call you in real life and tell you this --- you would probably call up the police and social service organizations and tell them a potential suicide might be happening.  Second Life strips away many of the social barriers in real life that do not allow us to do certain things.

Second, about half (it is Eddi's estimate) of people in Second Life are doing serious role play.  There are people role playing (or masquerading)  as the opposite sex, married people in real life role-playing as singles,  and unfortunately, people role playing for your sympathy. People role play for all sorts of reasons, whether or not it is to have lots of cybersex, to fulfill a fantasy, or to just hurt people and have a good time while they are doing it.  Unfortunately, there are many people in real life here, and in places like Facebook and other social media sites, who get their jollies doing just this, hurting others, but they are in a distinct minority.

People can also role playing for your sympathy for financial gain (one day, for example, you get a message that they are homeless or have a broken computer and need lindens or need for you to wire them cash in real life). They can also role play for your attention  - for example,  someone claiming that they might commit suicide, unless you spend much more time with them than you planned to.

But here is the problem-- most of the time you have no idea who is role playing and who is not.  You simply do not know if this person actually is suicidal without meeting them in real life, or knowing them beforehand.
There is some possibility that they mighty be truly suicidal -- and trying to reach out to someone here for help. However, in all likelihood, this person is just trying to get your and everyone else's attention.

You have three options as Eddi sees it:

1.  You can assume that they might be suicidal, and spend a huge amount of time here speaking with them and being their friend.  This, in my opinion, is a horrible way to spend your Second Life. This person will just draw you in deeper and deeper, and in all likelihood, hurt you in the process.

2.  You can mute them and unfriend them, and ban them from your land.  However, if you are the kind of person who worries about hurting others, you might think there would be some chance that they really mean it, and have this bother your.  I am all for point number 2, no one has the right to try to get your attention this way from a quick friendship in Second Life.   But if it does bother you, consider point number 3 below

3. You can unfriend them and mute them and leave a note. Something like this below:

Dear so and so:

I am worried about you.

When I became friends with you, I did not realize you assumed we would be best friends-- and contact me all the time when you saw me inworld and expect to have a long conversation with me. I do not have time to do this, I do not like IMing all day.

You scared me though when you said you might commit suicide.  I am going to have to unfriend you now, because I am worried that you might need need professional help which I cannot provide.  I do not want to say the wrong thing to you, I am not a mental health professional. If you truly are thinking about suicide, you must seek professional help immediately.  You need to call 911 in the United States, or your local police, and ask them for  help.  They can provide the type of professional help that you need that I cannot.

I hope you will get better, and wish you the best of luck.

If this sounds cold, there is nothing else you can do other than be harmed in the process. Just remember - no one has claims on your sympathy automatically.

And that is my advice for today!
Posted by Eddi Haskell at 4:49 PM