Thanks for the Memories, Boots and Shawn Mission 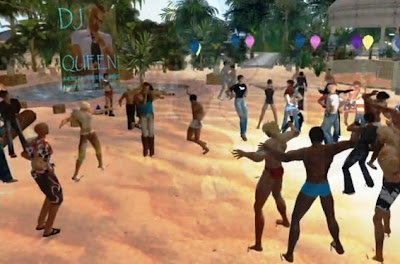 This has to be the corniest (for non-Americans, awkwardly sentimental) post I have ever written. I came upon these old photos today from what must be September 2008 - the retirement party of Boots and Shawn Mission from running Mission Beach. As many of you readers know, for many years, Mission Beach was the first place that many LGBT avatars went to when they arrived in Second life. There was always someone to talk to, offer advice, give you some free clothes, provide companionship, or even offer to introduce you to cybersex. Mission Beach was open 24 x 7 and there was always someone there to keep you company or something to do to keep your amusement. 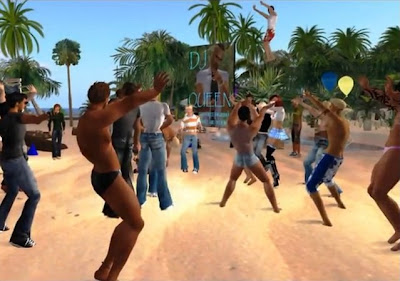 Mission Beach closed recently with controversy. Many of us, including myself miss how the old Mission Beach used to be when Boots and Shawn Mission were running it. Boots and Shawn founded the beach back in the early days of Second Life.  They made a large financial and time investment to start is up and get it going. Although "the beach" was frequently disorganized at times, and occasionally  had the camp drama reminiscent of a Joan Crawford movie, it was a place for love and sharing, For many, the attraction of the beach and its unique character declined when Boots and Shawn "retired" and turned it over to new management. Attendance and usage showed a big decline in 2009.

I am not criticizing anyone for this; many businesses and organizations exist on the personality and efforts of people who simply cannot be replaced. So, for many of us who have been resident in Second Life since 2008,  memories of "the beach" - how it was back when Boots and Shawn ran it, the wonderful and not-so wonderful people who were there, and memories of ourselves when we were perhaps a more enthusiastic about virtual reality, are ones that we will cherish forever.

When it came time for Boots and Shawn to retire, Jamie Cheeky and myself hired DJ Queen Edman to spin at a great party for several hours. The party was great. I took these photos then, only to have misplaced them for many months. I found them in some folder buried beneath the 15,000 photos I have stored on my drive today. I have to admit, I got a bit sentimental when I viewed these, and decided to make a You Tube Montage to Bob Hope singing "Thanks for the Memories". Please see this if you ever want to know if people in virtual communities can ever care for each other as much as they do in real life.

.Boots and Shawn, from what I understand, have gone their separate ways now; but still need to be thanked by us for all the hard work and funds they put into their sadly, now defunct vision. But, I think we need think of the positive times and thank Boots and Shawn, and everyone else who contributed so much to the beach, for all the great memories that will last forever.

Thanks for Reading, Eddi.