The Story of Stinky the Border Collie

I feel like writing tonight, and for some reason I was to tell you the story of Stinky the border collie. I have no idea how Stinky got her name. 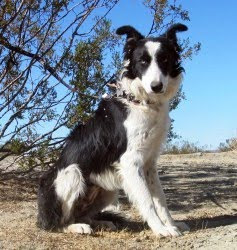 Stinky was my friend Mark's dog in London.  She was a gorgeous purebred, with papers and everything.  She was as intelligent as can be, and  just so sweet.  Mark, who just got out of the British army, used to bring her over to visit. I used to look forward to her coming over almost as much as Mark (too much information). 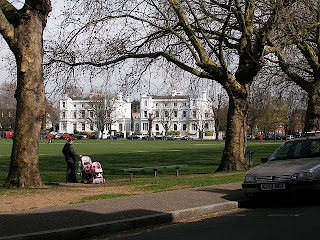 One weekend Mark asked me if I could dogsit her, and I said yes. Mark drops her off, and she she was so bouncy and happy to see me- until I realized she needed to be walked.  So I put on her leash, and walked  her through Richmond Green. Richmond Upon Thames, in West London, is very snooty to say the least - it is called the Beverly Hills of the U.K.  I lived in the only run down apartment block in the area near the train station -the only place I could afford - since it was an 18 minute train ride to work.

As I was walking Stinky, a very well dressed Englishman  walks up to us and starts petting her.  Here is how the conversation ensued:

Well Dressed Person - (WDP): Oh, what a LOVELY dog!  And what's YOUR name?

WDP  (looking at dog and ignoring Eddi):  Why that is a TERRIBLE name!  Just who GAVE you a  name like that?

Eddi:  Actually shes my friend's dog.  We're  trying to give her a new name, but she will only respond to names that end with an ee sound.  So we are thinking of Pinky, Slinky, or Kinky.

WDP:  Says nothing, looks at Eddi as if he was worried that his property values would fall if I actually lived in the area, and moves on. He probably thought I was a typical American.

I have lost contact with Mark but wonder where Stinky ended up.  She was very spoiled, so I am sure she is well taken care of.
Posted by Eddi Haskell at 1:00 AM