I want to share more photos with you of Wet Cube, a new club that has to be on the the most interesting architecturally on Second Life. I first wrote about this club last week.  I took these photos with the TOR Lemon Sky setting on Emerald, I like the peachy sky effect which I think goes well with the colors at the club. 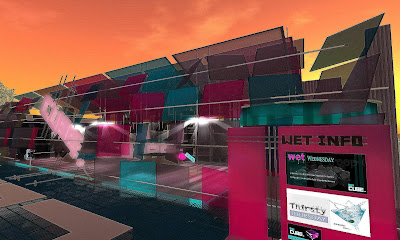 I originally called this club a "gay" club but Kalaki Bekkers, the club manager sent me this message:

Our following is mostly gay but I wouldn't go as far as to say its a "gay club". Id say more gay friendly. We are a very laid back place. We really don't have any rules are far as dress code or anything like that. We like to keep the atmosphere fun and upbeat. Also, its a fully functioning media club. We have over 30 tvs linked together that stream youtube videos and music videos all in sync. When we have live DJs on Wednesdays we don't have the media on for lag reasons. We wanted to break away form the mundane type of clubs that are on every street corner. Cherish Demonge is constantly changing the build of the club to keep things new and fresh. 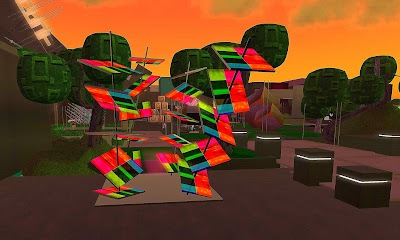 I love the artistic touches at the area surrounding the club like this one above.  Wet Cube is really worth a trip just to check out the ambiance and the art, let alone dancing for a fun night out. 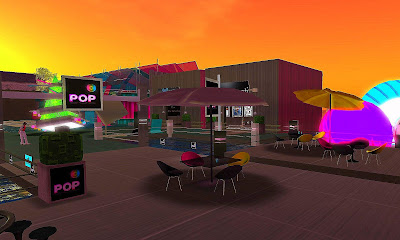 Pop is a nice cafe to hang out at. I need to figure out where Cherish Demonge, found the outdoor furniture above and encourage him to sell as much of the items he has designed as possible. 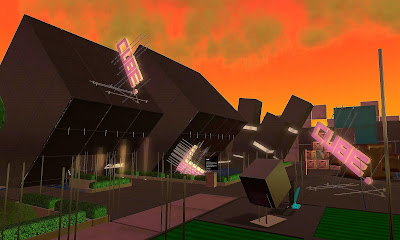 There is a great art gallery that is composed of Cubes laid out on their corners that Cherish has put up.  It is worth a trip. 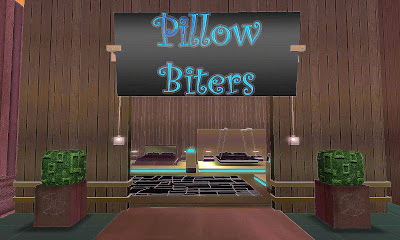 Dextrum Boucher's Pillow Biters store is next to the club as part of their development.  Dex has the best designed sex furniture on Second Life and looks great in an upscale modern home or apartment.  And the animations are hot.  His furniture targets the gay market and needs to be seen to be believed.