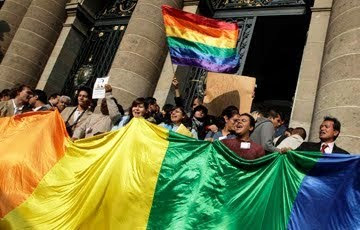 The council of Mexico City (population 8.9 million people) approved gay marriage today by a 2-1 margin.  Mexico City is now the largest city in the world where one can get married as a gay couple. The bill redefines the definition of marriage, paving the way for same-sex couples to wed as early as February. Leftist mayor Marcelo Ebrard, from the Democratic Revolution Party (PRD), now must sign the bill into law, which he is expected to do.  This beats a similar move in Buenos Aires which legalized civil unions between gay couples in 2002; gay marriage is expected to be legalized in the next several months after an anticipated postive court ruling.

Where can Gays and Lesbians now get married?

In the United States: (depends on which state you are in, however states do not have to recognize gay marriages if performed in another state, see below).

Israel (For example, you can get married in Canada; you are considered married in Israel if you produce a marriage license)

in the United States: (you can get married in any of the above states and Washington D.C. and be considered married in these states):

California (past retroactive): On October 12, 2009, Governor Schwarzenegger signed SB 54 allowing same-sex marriages from other states or foreign countries performed on or before November 4, 2008, to be recognized as well.

Rhode Island (waiting for a definitive ruling however)

New Mexico (no specific prohibition has ever existed for gay marriage).