The Metaverse Journal Publishes its 10 Virtual World Predictions for 2010 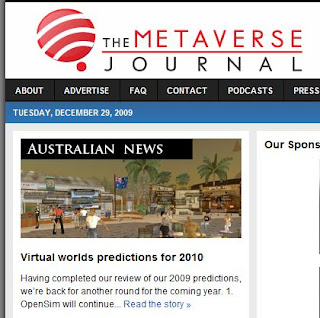 I published my 10 Second Life predictions for 2010 here last week.  Here is what the Australian Metaverse Journal published today:

Having completed our review of our 2009 predictions, we’re back for another round for the coming year.

1. OpenSim will continue or even improve on its growth trajectory – the momentum will continue, although a handful of larger grids are likely to have the lion’s share of that growth, with all the challenges that go along with it.

2. Australia will have its first government funded virtual environment – a proposal is already underway to see this come to fruition. Education will be the focus, but the foresight of the proposal’s facilitators is likely to ensure it involves business, education and government in a collaborative partnership.

3. Closures – it’s not a desirable prediction to make, but unfortunately it’s also a fairly safe one. There’ll be company and/or platform failures. Some may be bought out, but like Metaplace in the past week, there’s going to be some outright shuttering of some environments. I have some specific ones in mind but don’t have the data to support naming them specifically as being on a ‘death watch’.

4. Intellectual property disputes – The Eros vs Linden Lab action is likely to be resolved during 2010 and it will generate a large precedent in regards to virtual goods. Linden Lab will probably defend the action successfully, but the playing field will still have changed considerably.

5. Integration – Whether it be Second Life or Habbo Hotel, the level of integration between virtual environments and social media services will increase. Whether it’s a Facebook Connect sign-in or the ability to Tweet from Second Life, that functionality will move from the plugin / add-on phase to core architecture more commonly.

6. ABC in Second Life – I don’t have any inside knowledge on this, and I really hope I’m proved wrong, but I can’t see the ABC continuing to fund its Second Life presence beyond 2010. For the past year, the majority of the activity on ABC Island has come from its tight-knit community, with support from ABC staff. With the burgeoning ABC Online continuing to grow, there’s always the risk that the Second Life component will be squeezed out. Please, prove us wrong on this one.

7. The mandatory ISP filter – If the legislation passes during 2010, there remains a real possibility of adult content in Second Life and elsewhere falling foul of the filter. There were some gob-smackingly naive acceptances of Linden Lab’s claim they’d heard nothing about being affected by the filter and therefore were not concerned. There’s a chance everything will be fine but given the blacklist isn’t defined, nothing is certain at this stage. Our prediction: Australia-specific verification mechanisms will need to be put in place for Second Life and other environments where content creation occurs.

8. Taxation of virtual goods – 2010 will see the United States further formalise taxation arrangements in regard to virtual goods. I doubt the Australian Tax Office will make any substantive rulings in the coming twelve months.

9. Gaming worlds – 2010 is going to see the largest MMO launch since World of Warcraft: Star Wars The Old Republic. It won’t eclipse the incumbent but it will become the solid number 2 player in the short-term, with all bets off in the longer term. The second half of 2010 also sees the launch of the next World of Warcraft expansion, called Cataclysm. Head-to-head clashes in the MMO industry don’t get much bigger, and it’ll make for some fascinating times.

10. Social games – this year saw social games like Farmville take off in a big way. There’ll be some significant fatigue from users with these platforms, but there’ll also be further innovation to make them more engaging and with easier integration of virtual goods without the spam-like accompaniments that plague people’s Twitter of Facebook timelines. Overall: continuation of exponential growth, albeit not at the same level it has been the past six months.