Controversy in the UK! Joe loses the race for number 1 Christmas Single! 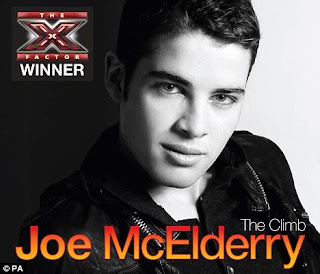 There is controversy brewing in Britain! The coveted number 1 spot for best selling Christmas single has now become a culture war.


This song, a cover of The Climb, by cute-as-a-button 18 Year Old Joe McElderry, has apparently nauseated many Brits. It may have to do with the fact that Joe won the X-Factor this year, which  is producer Simon Cowell's latest platform for making huge money while insulting his all to eager contestants and irritating the public at large.  It should have won the spot for best selling single.  It did not, and it is the first time in many years that this happened.

By the way, if you think Joe is cute check out his audition video here.  You can see he won due to his vocal talent alone (yeah right, but he does have a great voice).  Most of the girls and a good percentage of the guys including Mr. Cowell were eating his toothy grin and eyelashes right up.

In a consumer revolt fueled by rapid viral information sharing, US rap metal band Rage Against The Machine's 1992 hit "Killing In The Name", which has lyrics about rebelling against control, beat gorgeous young Joe for the top spot by outselling him 500,000 - 450,000.  Facebook was further brought into prominence, since the song was downloaded through their site, and not available through other commercial methods. Something good came out of all this. Over $160,000.00  US (90,000 British Pounds) has been raised for the homeless in the UK since the group donated part of the proceedings to the organization  Just Giving.

Fear not for chiseled young Joe. He has taken this all in stride, and actually has now outsold Rage Against the Machine. He is up to 800,000 single sales last time I checked.  He just will not get the title for number 1 Christmas single. If anything, this incident has made him even more popular among those of us (myself included) who are a bit mesmerized by him.


Don't expect his wholesome act to last for long.  Within six months he will be all buffed out and tanned with a much lower body fat percentage so he can get even more votes for his entry in the 2010 Christmas single - when he sings his cover of Irish Boy Band' Westlife's Flying Without Wings with his shirt off (can't you just see it?  I just made it up but it just might happen).

Is he gay?  Odds have already been posted on whether or not he will "come out", and there are even bets on who Joe will lose his virginity too, with Simon Cowell up there (I am not joking, they bet on anything in Britain.  But why do they think he is a virgin?).  It is a bit of a secret over here that the British are way more advanced when it comes to using Web 2.0 e-commerce and social networking, and Joe's loss proves it.