Caledon in Blue Mars- My Tour With Desmond Shang 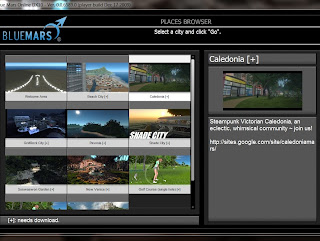 Blue Mars received a major upgrade last week.  For one thing, the client is now only about 400 megs and not 1.3 gigs. It does not take forever to install it. The new web page interface (above) was cool too.   For another thing, there are some more cool places to visit. Caledon, the Victoriana min-continent continent has also opened up an area on Blue Mars, and I was very keen to see that.  I had a major article on Caledon over in VR Style magazine this past July. 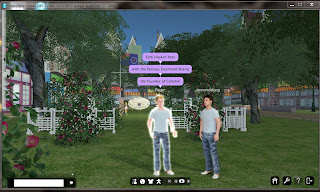 I then teleported into Caledon and who should be standing right there but Desmond Shang himself!  He is the founder and guvnah of Caledon, one of my favorite places in Second Life.  I interviewed Desmond this past July in the Steampunk issue of VR-Style. As soon as I told Desmond that "Roger" my Blue Mars avatar was really Eddi, we began to speak about what was going on. 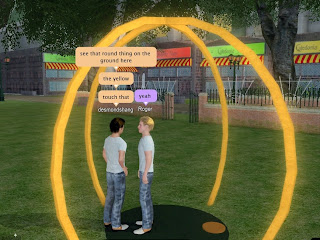 When you type-chat in Blue Mars (there is no voice yet) these comic-bookish bubble appear above your head.  I do not like it much.  I take photographs of course (all my work in Blue Mars is done via screen-scraper) and there is no way to eliminate them as of yet. The yellow contraption above is a teleport station, and Desmond was showing me the wilderness area outside of Caledon.  I arrived from the site site area in the center of Caledon Green not far from where the teleport station is. 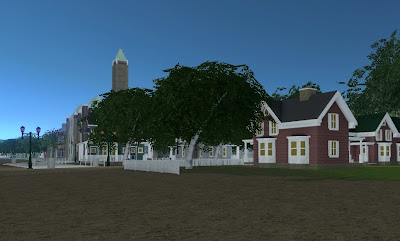 Caledon in Blue Mars was much more realistic looking than its Second Life predecessor.  There are stores and shops, and Desmond told me that he was going to reserve a place for my Blue Mars gallery even though he was basically sold out at this point.  It reminded me of a New England village, and it felt very green and comfortable. There were flocks of geese flying overhead, which made the skies look realistic. 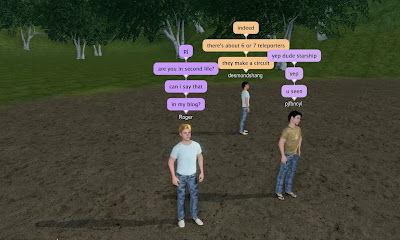 We also hooked up with Dude Starship, who is a well known Blue Mars blogger.  He had given me some pointers before, and it was nice to meet him in person.  Desmond took the both of us to outlying areas via the yellow teleport system and the wilderness of Blue Mars was quite impressive.  A bridge that reminded me of the Golden Gate linked some of the areas together. All and all, it was a very day in the expanded Blue Mars, and Desmond is on the way to becoming the first multi-planet land baron! 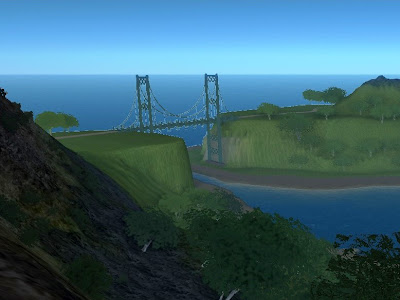