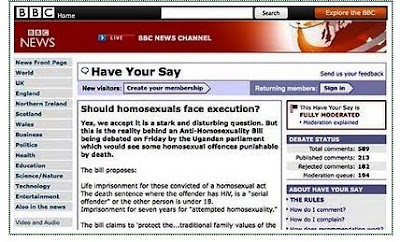 Despite the fact that I have been recently interviewed on BBC Radio 5 as Eddi Haskell, I have never really liked this organization much. I find there new coverage to be stilted politically to the point of influencing the way they report the news to advance what many consider to be a "politically correct" agenda that I do not necessarily agree with.

The British Broadcasting Corporation gets governmental funding but makes it a point to challenge "western values" as much as they can.  Today they have gone way way too far. If you have been following the news, Uganda, which can claim as its legacy some of the most most malignant leaders the world has ever seen, such as Idi Amin, who killed up to 500,000 of his own people, are now arguing capital punishment for anyone suspected and "proved" to be a homosexual.

So what has the "multicultural" BBC done? Started a debate on this in "Have your say".  BBC Radio 5 is heard around the world and the feeling is that people who are opposed to allowing us to live have their right to be heard.   In fact, both sides are considered to be morally equivalent in this debate.

Now, this is what I think. Some things are NOT open to discussion.  Period.   Let me give you some questions that the BBC should NEVER ask its viewers around the world.

--Do husbands have the right to inflict corporal punishment on their wives and own them as chattel?  Do woman deserve any protection at all?  Can they be murdered by their husbands for infidelity?

--Were the Nazis right in killing six million Jews-- were Jews a menace to the Aryan race and did they deserve to be gassed?

--Should the slave trade be legalized and reintroduced, since it exists in places like Sudan today anyway?

--Since Southern Baptists are at the root of all evil in the United States, should they be banned from practicing their religion under pain of death?

In all cases, the answer is no!   Period!

You get my drift.  Some things are not up for discussion.  Including our lives.  An organization like the BBC. which is heard around the world, has no right legitimizing something by opening debate to those who are the side of what is clearly wrong and morally unacceptable. Such as execution of gay people, something which is happening in Iran today.

The BBC got wind of the moral outcry and changed this headline later this afternoon.  They reflected a moral imperative by eliminating the first question. Still, it is not enough.What should go in this place is this:

What efforts should the world take to make sure that gay people never have to face this brutal kind of discrimination again?  What education is necessary, and what sanctions do we need to take against countries like Iran and Uganda to make sure this NEVER happens again?

Yet, the spokesman from the BBC, Landor,  had the audacity to say this about the "dialogue":


"The programme was a dignified exchange between people who have differing beliefs," Landor added.

How can he call a program in which someone called for our deaths be diginified?

One more thing. The BBC is making a big mistake here saying that Africans" have different views towards homosexuality than those in the west, and are less accepting of it, and not mentioning that South Africa  has some of the strictest laves on the books to protect LGBT people, and has legalized gay marriage. But if they were to do so, that would be implying that those who DO want to see us dead might be wrong, wouldn't it? Get my drift-  this is political correctness gone too far.

I vote in the U.K., I am waiting for the next election to be announced at any time for either March or May.  But the funding and the future of the BBC needs to be put on the table. They crossed the line today.

for more of a discussion see Joe's Blog today on this subject. 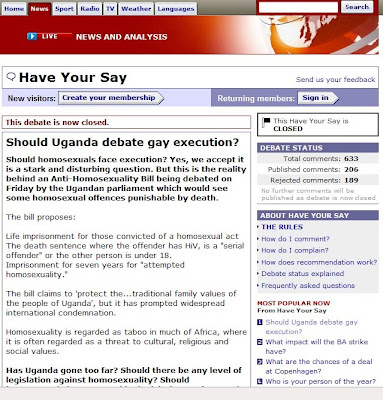