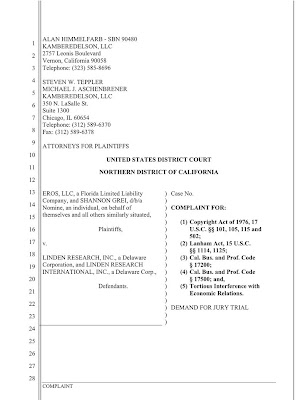 The news first broke in the Alphaville Herald yesterday. Stoker Serpentine and Muchflower Zaus'es class action lawsute which others may potentially  join alleges intellectual property violations for both copyright and trademarked works.

This is not the first time that  Mr Serpentine has aggressively defended his copyright in Second Life where content theft seems to be becoming more rift. However, given the importance of this matter to Linden Labs, one can expect an appeal, perhaps to the very highest levels of the United States Judiciary System. Although it is highly improbable the Supreme Court would agree to hear this case, it is possible. (could you imagine explaining how a sex hud works to Justice Scalia/?) . Any decision is at least two years away unless a court grants the plaintiffs in this matter, Stoker and Muchflower,  some sort of injunction on Linden Labs if one indeed is called for in a petition that forces then to keep more careful track of RL and SL activities of their residents and their alts.

What to look out for:  The ability of other content creators to join in a class action lawsuit is possible. If this is the case, keep accurate records now!  Make sure to document how much you estimate you are losing if indeed you are being ripped off.

My own initial take o on this situation is this.  Unless any direct copyright laws are actually broken through the actions of Linden Labs, this case will flounder on lack of precedent, although others see a victory by Stoker. In addition, I do not think a verdict limiting every IP address to one account will be granted, which apparently is a negotiating tactic on the part of the plaintiffs. I think that Lindens latest moves to protect copyrights to the best of their ability, which seems to be happening now, will ultimately prove to be sufficient to the courts.

Digital copyright enforcement is something that has proven very difficult to enforce in all areas.

Here is a link to the direct class action complaint.
Posted by Eddi Haskell at 12:20 AM