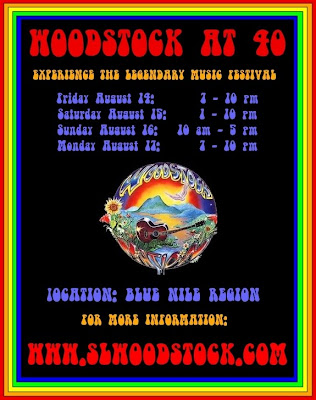 Woodstock 40 opens on Friday, August 14 in Second life and last for four days.

The four days will match the 40th anniversary of Woodstock, the most important music festival of all times.

Over 21 hours of music will be played. Original recordings will be played on a sim that has been built to look like the original site in New York in 1969. A live band will be on stage playing the music to give virtual replication of the original concert.

What is so interesting about this is that 296 Songs have been identified at the original four day Woodstock Festival. The founder of SL Woodstock, prominent DJ and Blue Region owner Aristippus Larsson has assembled over 165 recordings of live Woodstock performance, some of which were released this year. Another 100 songs were commercially available over the past 40 years. Aris has spent years assembling what is the most comprehensive assembly of original Woodstock music available anywhere. As far as we know, a replication event like this has never been attempted in real life, since some of the original music has just recently been released.

Playlists for each day will be given by a greeter to each person who arrives for Woodstock at 40. These will include the name of each song, where it is Live from the original Woodstock, live from other venues, or studio recording. A note will tell people songs are available as downloads from online and other sources.

Collections will be taken at the event to benefit www.breadandjams.org, a real life Homeless Shelter in the Boston, Massachusetts area.

Here are the times for the event.