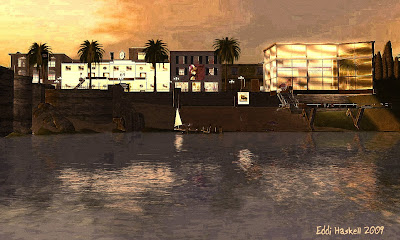 Route 69 in Zindra is a new development in the adult oriented continent of Zindra in the Virtual World of Second Life. It is next door to Jago Constantine's and Eddi Haskell's Museum of Sex Furniture on the Uxert Sim. It reminds photographer Eddi Haskell of the towns near Cannes on the Mediterranean. The music selected is La'Mer by Charles Trenet.

One more note from Eddi" Is this really the same song as Bobby Darin's classic hit "The Sea"? How come it sounds so much more romantic here?

Email ThisBlogThis!Share to TwitterShare to FacebookShare to Pinterest
Labels: Eddi Haskell on You tube, Zindra