Homosexuality Now legal in all of India 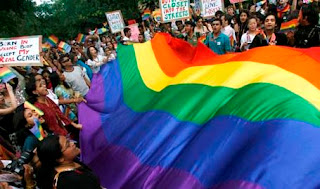 Earlier today, citing precedence, legal advisers to the Indian Supreme Court indicated that homosexuality was now legal in all of India , not just the the capital district of New Delhi.

Despite significant religious opposition, the government indicated that it would not challenge this ruling.

This means that for the first time. LGBT people in one sixth of the earth's population can now legally engage in the pursuit of their own personal sexuality.
Posted by Eddi Haskell at 1:10 PM