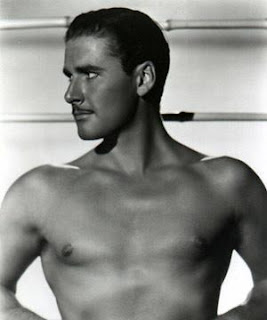 Errol Leslie Flynn, the ultimate swashbuckler actor was born 100 years ago today in Tasmania, Australia. He is controversial; allegations of affairs with underage girls and Nazi sympathies have been raised- but have not damaged his reputation to any great extent . He was a good friend of Fidel Castro's. He probably was bisexual; he even suggested this phrase for his tombstone (jokingly of course): If it moved, Flynn fu**ed it. The phrase "in like flynn" was once used to describe someone who could easily make a sexual conquest.

Here is the trailer for one of his most famous flicks, 1938's The Adventures of Robin Hood. He certainly does look nifty in those little tights, don't you think?