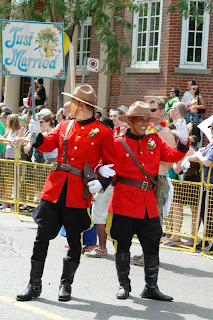 Canada became an independent (well kind of according to that Wikipedia article)kingdom from Great Britain on July 1, 1867. Today, they celebrate the fact that they are not citizens of the United States with fireworks and other big events.

I also have a thing for Mounties. Here is a gay Mountie couple (this is real) who just got married and were at the Pride parade in Toronto last year. When I visited Niagara Falls two years ago, I got real excited seeing so many Mounties up front and in person. There was something about the red uniforms.

This is a fun web site by the way- it shows pictures of real life fit gay jocks in Montreal who want to meet other real life gay jocks. Check it out: http://www.realjock.com/gay-men/quebec/montreal

Canada is very socially advanced compared to their, at times, more neolithic mega-neighbor to the south. You can get married in Canada if you are a same sex couple. Here is information how. One thing which is interesting- although you can get married there as a non-Canadian gay couple with no residency requirement, one partner must be resident in Canada for one year before a divorce is granted! Since most American states will not grant same sex partners a divorce (yeah DUH Eddi), make sure you really like the person you marry or you may find yourself married for life.

Canadians are masters at making short movies featuring there stirring national anthem, Oh Canada!, Here is a very good television sign-off from CFTO television in Toronto in 1984, featuring a nice old movie of Toronto when it was quaint, their royal anthem showing a very very young and pretty Queen Elizabeth (who is Queen of Canada) at the Trooping of the Color, and a great version of Oh Canada song by a cute children's choir. I am not Canadian, but if I was, I would be proud after seeing this movie!